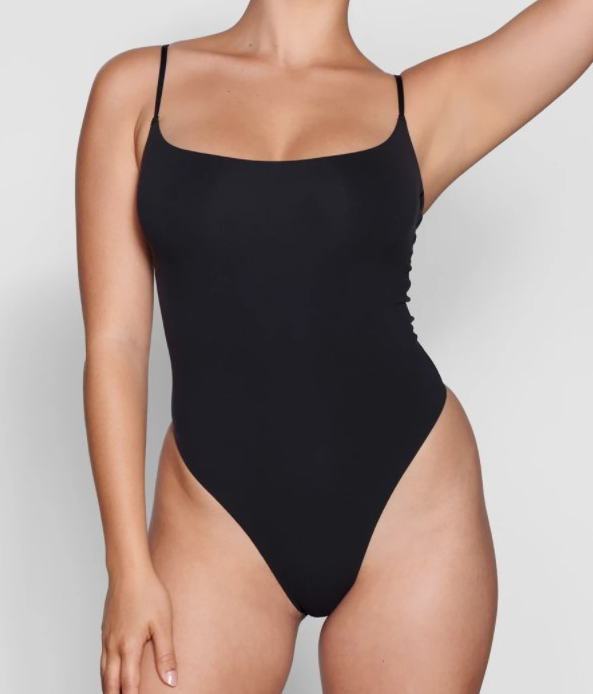 SKIMS is a relatively new brand, specialising in loungewear, shapewear and underwear. They have taken the market by storm, primarily due to the fact that the owner is none other than Kim Kardashian. Although the company has performed well since it’s launch, a quick look through the website reveals that very little has been done in the way of sustainability and there is a serious lack of any goals or commitments to make changes for the future. The Fits Everybody Cami Bodysuit was one of the original products launched by SKIMS and currently retails for ~£60. As with many of the other products, there are some issues regarding the sustainability of the product.

The fits everybody Cami is made of two materials: 79% nylon and 21% spandex, both of which negatively impact the environment for several reasons. Let’s begin with nylon. Nylon is made of synthetic polymers–meaning it is created in a lab–and is primarily produced in Asia. The production of nylon is a very unsustainable process as its main ingredient is petroleum oil which has to be mined, fracked, or extracted from around the world, causing damage to the environment as well as the communities of people and other animals in the area. In addition to this, the refining process requires lots of heating, water, and energy usage and often leads to nitrous oxide pollution–a greenhouse gas roughly 300x more potent than carbon dioxide. Spandex is similar to nylon as it too is synthetic, however, its production is less damaging as it is made entirely under lab conditions. This is often a very energy-intensive process but can be made more sustainable if renewable sources are used. Pollution caused by toxic chemicals leaching into water supplies is potentially the biggest concern surrounding spandex. Both nylon and spandex are non-biodegradable and although they can both be recycled, very few centres currently accept them. The use of these materials in the shapewear makes sense due to the properties they both have, but they are both very unsustainable and there is no indication from SKIMS on how they are sourced and manufactured. The packaging used to ship the items is claimed to have had all plastic and non-recyclable materials removed from it however, there is very little information from SKIMS on how this has been done and whether this claim is true.

The SKIMS website claims that “fair wages, safe environments and healthy working conditions” are provided for all workers however there are no reports or third-party reviews of these claims. This is a major issue for SKIMS; any company can say that they’re treating their workers fairly but when the only piece of information being given is “Made in X country” written on the garment, no one can really be sure what is happening within the country. The production of SKIMS garments has been under scrutiny in the last couple of years as it was revealed that much of the shapewear was made in Turkey. For years Turkey has been accused of Armenian genocide during the early 1900’s, something which Turkey strongly denies. Kim Kardashian is, in fact, half Armenian, so many critiques have called her out for going against many values she has been so vocal about on social media.

SKIMS markets itself as a “solutions-orientated” brand, by providing apparel for everybody, no matter their size, shape, or colour. The company is built upon inclusivity and was started by Kim Kardashian after she herself struggled to find shapewear that worked for her. The low-cost garments make them accessible for everyone and the Fits Everybody Cami is just one of their many products designed to help people feel good about how they look and feel. However, the company and the owner have had their fair share of issues. The company was launched under the name “Kimono” and many consumers were quick to call her out on cultural appropriation causing Kim to delay the opening of the stores and online shop whilst they rebranded. Three months later the company restarted as SKIMS. Whilst the company makes claims of high ethical standards as well as having a “commitment to sustainability, accountability, and transparency”, there are no links to any reports or reviews proving that this information is correct. In addition to this, the Kardashian-Jenner family are often at the centre of backlash after claiming they live sustainable lives whilst proceeding to fly in private jets around the world multiple times a year.