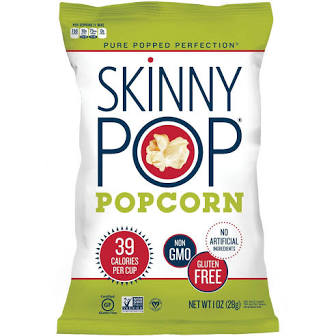 SkinnyPop was created in Skokie, Illinois by Andy Friedman and Pam Netzksy in 2010 with the motto of “pure popped perfection”. Since then, it was bought by The Hershey Company and has become a popular, well-known snack. SkinnyPop original popcorn bags are relatively low-calorie and have a good amount of fiber. They are GMO-free, gluten-free, and preservative-free. However, some of the main issues with this snack are the lack of transparency when it comes to their labor practices and supply chain, as well as their ownership by The Hershey Company. Also, there is an organic version of SkinnyPop, but it is harder to find and more expensive on most websites which can deter more customers from choosing this option!

SkinnyPop only contains three ingredients: whole grain popcorn, sunflower oil, and salt. There are no artificial ingredients or flavors added, and being allergen-free makes them a more inclusive snack. However, there is a lack of information on where these ingredients are being sourced from. Also, none of the ingredients in the snack are organic, meaning pesticides and synthetic fertilizers could very well be used during its production! Sunflower oil production can also have high water and carbon footprints and can be inflammatory if consumed in large amounts. Finally, SkinnyPop popcorn bags are made up of a mixture of aluminum and plastic, so they can’t be thrown into the recycling bin. This means they will end up in our landfills, oceans, and forests. The Hershey Company has said that they expect all their packaging to be recyclable, reusable, or compostable by 2030, so it will be interesting to see if they make changes to the SkinnyPop bags sometime soon.

Since there is a lack of transparency on how the snack is made, general information on popcorn production has to be considered. Most of the corn grown in the United States is done through monoculture farming, only growing one type of crop in one specific field. This technique can lead to soil degradation and harmful runoff that will negatively impact our water quality and animals. After the popcorn is grown, it will be sent to the factory. Usually, the kernels will then go through multiple quality screenings before being combined with the oil. Large amounts of heat are then used to pop the kernels. Large amounts of energy could potentially be going into the production process, but we would need more information from the company to know to what extent.

The SkinnyPop company’s mission is to produce a snack that tastes good and is good for you at the same time. Founders Andy Freidman and Pam Netsky started making the snack out of their kitchen before it was acquired first by Amplify Snack Brands and now The Hershey Company. Hershey’s goal in owning SkinnyPop is to further diversify the types of products that they sell. Unfortunately, The Hershey Company relies on a global supply chain that spans communities struggling deeply with poverty and inequality, leaving a lot of room for malpractice. While the company lays out goals for a more sustainable future in its reports, there is lots of work to be done. The company has been tied to unacceptable practices such as child labor and in general, cheap labor in dangerous conditions. Finally, there is unfortunately little information on the SkinnyPop workers involved in actually farming the popcorn or the workers in the factories. Overall, more transparency about the product would serve both the snack and the brand well.