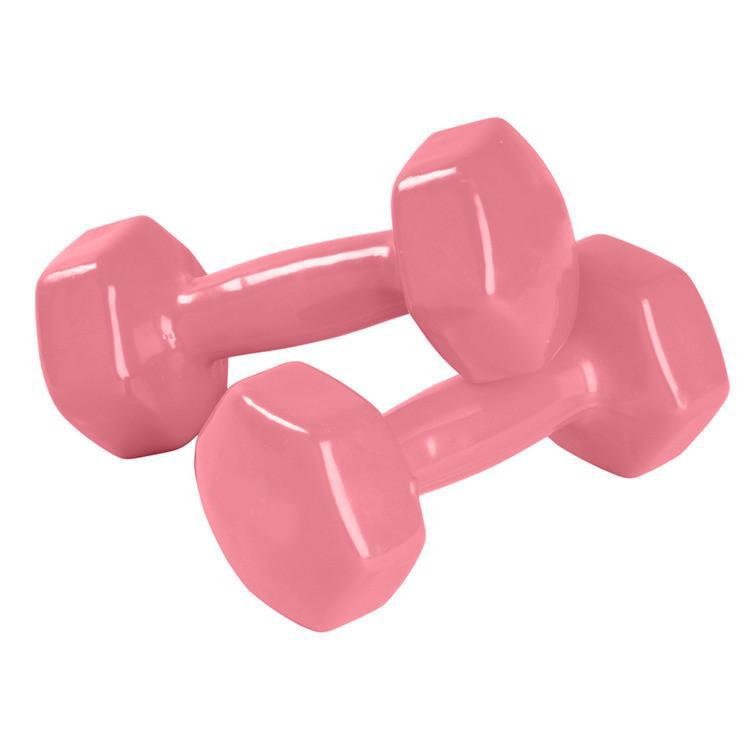 Dumbbells are a staple to any work out regardless of whether or not you are a gym rat or fitness junkie. This equipment is seen in a variety of places from your own home to a fitness gym. I also regularly use dumbbells at my martial arts studio to exercise and have a pair at home. I do not use Spri’s dumbbells, but they are a popular choice among those looking for affordable dumbbell options. Dumbbells are very common and I felt that they were overlooked in the sustainability realm. I decided to review Spri’s Deluxe Vinyl Dumbbells, which come in a variety of weights and colors. The cost of a pair ranges from $11 to $90, depending on the weight.
I was not surprised to find that these dumbbells are not sustainable, and that Spri is taking zero initiative to better the environmental impact of their products and practices. The corporation’s lack of transparency raises a lot of suspicion and is extremely concerning. There are not many resources on the sustainability of fitness equipment in general, and this needs to change! As consumers, we should pay more attention to the sports and fitness industries in terms of sustainability. Some more sustainable alternatives to purchasing dumbbells would be shopping for them second hand, or purchasing adjustable dumbbells if you are looking for multiple weights!

Spri’s Deluxe Vinyl Dumbbells are made of vinyl and cast iron. They are coated with vinyl, or PVC (polyvinyl chloride) which is a form of plastic. It can be produced in many different forms including as a hard material and as a flexible fabric. Vinyl is extremely versatile, and is used for a variety of different purposes and industries such as in construction (i.e. flooring, fencing), healthcare (i.e. single-use containers, tubes), and clothing. Vinyl uses phthalates as plasticizers, which allow for PVC to become soft and flexible like fabric. There is controversy regarding phthalates, as there is evidence emerging that it causes health problems but studies are currently inconclusive. Nonetheless, we should be careful with phthalates in case concrete evidence does surface in the future. Vinyl is unsustainable because of how heavily processed it is. Its production requires a lot of energy for chemical reactions and uses oil to do this. PVC is a petrochemical product, meaning that it’s made from petroleum. Petrochemicals contribute to pollution in the ocean, atmosphere, climate, and ecosystems due to its creation of greenhouse gases and use of natural resources and fossil fuels. A better alternative to PVC would be natural rubber (not synthetic) because it is produced from trees and uses less chemicals.
Cast iron is made by combining a series of raw materials, as iron is rarely found in its pure form. It oxidizes very slowly, which makes cast iron last a long time. When cast iron oxidizes, it releases iron ashes. These ashes are carbon-based and good for the environment as they promote plant growth and increase plankton life in oceans. Cast iron is also recyclable, and because it lasts so long, it can be recycled indefinitely. If maintained properly, cast iron could be reused repeatedly and reduce greenhouse gases.
Spri does not provide detailed information on what their dumbbells are made of, such as the percentages of vinyl and cast iron they use or the specific types they use to make them.

To produce cast iron dumbbells, iron ore is first smelted in a blast furnace to produce what is called pig iron. Pig iron is then remelted and combined with other scrap iron and/or steel. The iron then goes through the casting process, during which the molten iron is put into a green sand mold to create its shape. Green sand is wet sand that is used to shape cast iron. After being poured into the mold, the cast iron takes several hours to cool. The dumbbells are then coated with vinyl to give it a glossy finish that is easy to grip.
The process of metal casting is not sustainable and contributes to several different types of pollution. Harmful waste can be produced because of the potential lead, zinc, and other metals that may be present in the process of casting. Additionally, the green sand used to mold the cast iron generates waste due to sand fines which cannot be reused. Air pollution is the most impacted in this process. Hazardous Air pollutants are produced when molds containing carbon materials are exposed to extremely high temperatures, which occurs when iron is poured into the mold. Among the gases that are produced, benzene—which is a human carcinogen and a potential cause of leukemia--is released the most.
Spri manufactures and distributes all of their products, but there is no information stating where or how they are manufactured. The brand provides absolutely zero information regarding their manufacturing practices, and there are also no credible outside sources that do. Spri’s address is located in Illinois, but we can assume that this is their corporate headquarters. This lack of transparency is a huge red flag, and it raises suspicion on their manufacturing practices. The absence of this sort of information allows unethical practices to remain in the dark and problems to never be addressed or solved, which is very harmful both socially and environmentally.

Most dumbbells are manufactured in China because they are light-weight goods. China’s factories are well-known for having bad working conditions for their factory employees. Factory workers are exploited by being put in dangerous working environments, not being paid living wages, and working excessive overtime. Exposure to heat and chemicals make conditions hazardous in these factories.
Spri again provides no information on where their products are manufactured or who produces their goods. Consumers can only assume that these products are being produced unethically because of their lack of honesty.