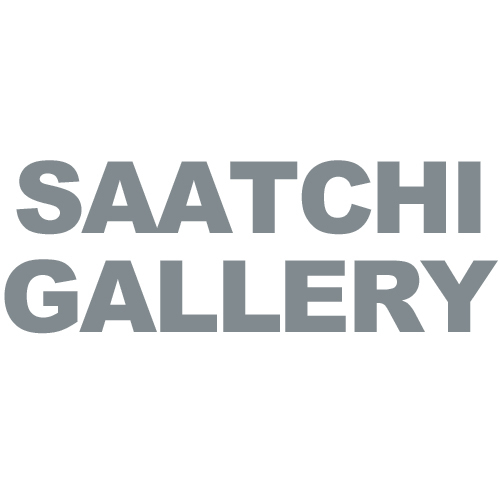 The Saatchi Gallery is a 70,000 square foot exhibition space currently located at the Duke of York’s headquarters on King’s Road in the London borough of Kensington and Chelsea. The Gallery was first founded by Iraqi-British advertising mogul and art enthusiast, Charles Saatchi, in 1958 to house his private collection. Over its 63 year history, the Gallery has moved several times having first been opened in an unused paint factory on Boundary Road in St. Johns Wood before relocating to County Hall in 2003, and eventually moving to its current residence at the Grade II-listed Duke of York’s HQ in 2008. In 2019, the Saatchi Gallery became a registered charity that relies on private donations, but, moving forward it plans “to be self-funded and reinvest all revenue … to support access to contemporary art for all.” The Gallery showcases contemporary artists who might other go unnoticed for their contributions to art. Aside from its annual programme of exhibitions, the venue also hosts private events as well as educational workshops and resources for young students. The Gallery traffics in around 1.5 million visitors each year and is committed to making the intimidating world of contemporary art accessible for everyone.

From its inception, the Saatchi Gallery has been instrumental in defining contemporary art and culture. In fact, Saatchi is often credited with the success of the YBA (Young British Artists) movement that dominated the 1990s. Perhaps the most famous artist to emerge from the YBAs who was subsequently catapulted to international stardom with the help of Saatchi’s artistic patronage is Damien Hirst. Hirst’s work was first exhibited by Saatchi in 1992 and for a time the two “enjoyed a symbiotic relationship,” each bolstering the popularity of the other before Saatchi sold a number of Hirst’s works in 2003 after a rift in the relationship, massively depressing his market value. Despite being one of the most celebrated contemporary artists of the 21st Century, Hirst’s career has been plagued by controversy and criticism. Hirst has been repeatedly accused of plagiarism – in one instance Hirst was forced to pay an undisclosed sum to Children Nationwide and the Toy Trust after it was revealed he had plagiarised the design of an anatomy set for his sculpture, Hymn. But, the artistic integrity of Hirst’s work is not the only legitimate criticism that has been levied at the artist; Hirst has been repeatedly criticised for his so-called “party trick” whereby he would expose himself in public. Eventually, Hirst was called out for his inappropriate behaviour after he performed the same “party trick” in a Boston bar and a woman subsequently sued him to the tune of $100,000. The fact that Hirst’s misconduct continued for so long without any intervention is a clear testament to the power and untouchable premium placed on his work. To make matters worse, the Royal Society for the Prevention of Cruelty to Animals has also raised concerns over Hirst’s careless treatment of animals after claims surfaced that some of the creatures used to create his elaborate installations were “killed in the name of art.” Ultimately, the Saatchi Gallery’s longstanding relationship with Hirst raises difficult questions about what degree to which we should separate the art from the artist.

Another artist who has hugely benefited from the support of the Saatchi Gallery is Gavin Turk. Turk’s conceptual work immediately caught the attention of Charles Saatchi following an exhibition of his work by the Royal College of Art in 1991. Over the course of his career, Turk has used his platform to raise awareness of climate justice issues; in 2018, Turk was arrested along with 80 others for taking part in a coordinated Extinction Rebellion demonstration in London. In his own words, Turk has acknowledged that “climate is increasingly becoming a vital subject for artists as they hold their mirrors up to society.” Inspired by his experience with the Extinction Rebellion movement, Turk created an installation for the contemporary art gallery, Reflex Amsterdam in 2019, called ‘Letting Go,’ themed around the “environmental consequences of human existence and consumer society.” The solo exhibition consisted of a series of works that highlighted the ubiquity of plastic waste in modern society. Aside from engaging with these socially charged issues in his own art, Turk has also expressed a keen interest in reforming the harmful practices of the art world whether that be finding ways to minimise the carbon emissions generated through the international transportation of art or reflecting on the process of creation itself and ensuring all materials used are ecologically viable. Turk is an example of an exceptional artist who has routinely used his platform to spotlight important social issues and raise awareness of the climate crisis.

While the Saatchi Gallery has worked with a number of talented creatives over the course of its history, Hirst and Turk are just two examples of artists whose careers were firmly established with its patronage and institutional backing. It is no coincidence that both these artists became fixtures of the contemporary art scene after featuring in Saatchi’s now infamous 1997 exhibition, Sensation. This exhibition displayed a collection of works belonging to Charles Saatchi himself and received intense media coverage, “demonstrating that new British art was … ready to conquer the world.” The exhibition originally opened in London but also visited Berlin and New York, attracting over 300,000 visits. There is no question that the works of Hirst and Turk would not have received the same attention nor would their careers have experienced the same longevity without the backing of Saatchi and his gallery. In this way, the Saatchi Gallery’s promotion of different artists has come to define the cultural landscape as well as the response to sensitive issues that have touched ordinary members of the public.

Since becoming a registered charity in 2019, the Saatchi Gallery has developed financial relationships with a number of patrons. Among its small group of patrons are recognisable brands like Chanel and media organisations like Euronews. Until the Gallery accomplishes its long-term goal of becoming entirely self-sufficient, we must examine the practices and environmental policies of its major patrons to better understand how it operates.

As previously mentioned, the Gallery is sponsored by the fashion brand Chanel. Chanel’s environmental stats are less than impressive; like so many other companies, the fashion house has made ambitious plans to transform its business model for the better, and while these plans might appear promising on paper, they have produced little evidence to prove they have made changes to their business practices or are on track to meet their targets. In 2020, Chanel outlined its set of sustainable goals entitled the Chanel Mission 1.5° - among its bold plans is a pledge to cut carbon emissions in half by 2030 and fully transition to renewable electricity by 2025. But, as I’ve already stated, Chanel has made very little effort to meet these goals. In fact, the closer you examine their corporate rhetoric on the issue of sustainability, the clearer it becomes that they are rather reluctant to make big, sweeping changes. Chanel’s Chief Sustainability Officer, Andrea D’Avack, has stated that Chanel’s climate strategy is not a reflection of what the company is able to do, but rather “the targets that have been imposed on us [by the Paris climate agreement]” – this seems to suggest that Chanel is not intrinsically motivated to change, but rather is driven by extrinsic political pressures. Furthermore, D’Avack was keen to emphasise that Chanel’s Mission 1.5° would be a “journey” that would force the historic fashion house to totally rethink every aspect of its business – the fact that D’Avack has described this process as a “journey” seems to suggest that there is not a clear roadmap with strategies in place to execute their grand plans.

Another patron of the Saatchi Gallery is the multinational law firm, Eversheds Sutherland LLP. Like so many other companies, Sutherland has a page on their website dedicated to sustainability which outlines the various sustainable initiatives they have undertaken. But, despite appointing two Sustainability Partners in 2008 to “hold the firm accountable,” it appears that Sutherland’s sustainability strategy is more about keeping up appearances than promoting meaningful change. One way in which the firm claims to have made a conscious effort to reduce waste, is through opting for “electronic methods of communication” rather than using paper when possible. The firm also claims to use 30% post-consumer waste fibre paper in instances where paper documentation is necessary, and they claim to follow a strict two-sided printing policy in their offices. When you consider that most office admin and communication is performed digitally now anyway, these policies hardly seem like anything to boast about. Another way in which Sutherland claims to have improved their sustainable performance is by introducing a series of energy-saving measures in their offices; these include installing energy-efficient lighting, reducing the number of printers, and switching computers to “sleep” mode whenever possible. Once again these energy-saving measures seem more like menial token gestures rather than any kind of genuine attempt to rethink the firm’s overall business model. Furthermore, Sutherland also claims to have fostered a more sustainable work ethos amongst its staff through the “Do One Thing Differently” campaign which encourages its employees to “modify one aspect of their behaviour every two weeks.” The explanation of their “Do One Thing Differently” campaign seems woefully vague and passes the responsibility onto Sutherland’s staff members rather than implementing top-down, structural reforms.

While the Saatchi Gallery became a registered charity in 2019, for the majority of its history it was tightly controlled and financed by its eponymous owner, Charles Saatchi. For this reason, the remainder of the review will be devoted to Saatchi’s personal background and business ventures. Saatchi has courted controversy both in his public and private life. Saatchi founded his hugely successful advertising firm with his brother in 1970, which over a short space of time came to dominate the sector as the largest ad agency in the world. One of Saatchi’s first major campaigns was for the Conservative Party’s election campaign in 1978, where his agency came up with the now iconic slogan ‘Labour Isn’t Working.’ Many argued that the campaign was in poor taste – the image of a dole queue alongside the slogan seemingly trivialised the suffering brought about by widespread unemployment and perpetuated unflattering stereotypes about the British working class. Regardless, the campaign was credited with shaking up the political landscape, destabilising Labours’ power and turning the tide on British politics by beckoning in a new era of conservatism under Prime Minister Margaret Thatcher. The success of Saatchi’s political marketing campaign was a testament to his ability to, in columnist Laura French’s words, “control the world around him … influencing both the field of politics and the business of advertising by pulling a few tactful strings.” The image that French paints here is a striking one of Saatchi playing the role of a sinister puppeteer, and it appears that there is some merit behind this comparison. Saatchi has often been accused of using his vast wealth to bully artists and manipulate the market; Damien Hirst reportedly told The Guardian in a 2001 interview that despite his pretences, Saatchi was no straightforward art enthusiast but a “cut-throat businessman.” In one instance, it was rumoured that Saatchi deliberately ruined the reputation of Italian painter, Sandro Chia, by purchasing his work only to immediately dispose of it. Similarly, Hirst himself – once Saatchi’s prodigy – “became a victim of the man who made him” when he was forced to buy back his own works from Saatchi at a significant mark-up after Saatchi threatened to sell it all at once, depreciating the market value of Hirst’s work in the process.