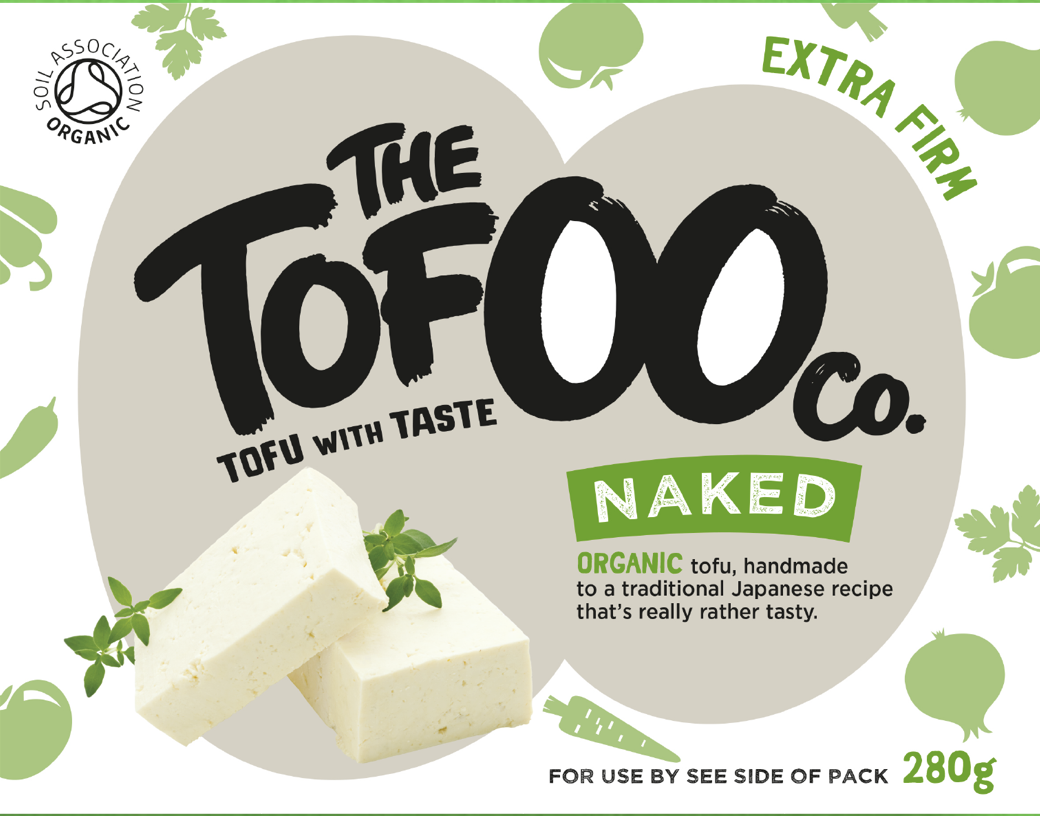 The Naked Block by The Tofoo Co. is an excellent product for consumers to help reduce emissions from food consumption. It uses minimal, organic, and natural ingredients. It is produced entirely in Yorkshire and sold all over the UK. Tofoo is open about their sourcing and places a lot of value on organic, sustainable soybeans (yay). However, they are a bit stingy with information about their production processes and scope 1, 2 and 3 emissions. They also have issues related to the use of plastic and the international import of their soybeans. Tofoo can be praised for their acknowledgement of these problems and for their openness to future change.

Tofoo’s Naked Block is made using a traditional Japanese recipe, using only 3 ingredients: soybeans, nigari and water. On their website, Tofoo ‘solemnly sweat on the Brownie code’ and promise that their soybeans are GM (genetically modified organisms) free, organic and sustainable. They source their beans from what they call “reputable” farmers in Canada (mostly), China and Italy (only some). They only purchase beans that are Organic certified by the Organic Food Association or the Soil Association. There are some major issues related to certifications, mostly due to leniency and lack of enforcement. But are these any good? Let’s look at the Soil Association as an example. This organisation claims to have developed one of the world’s first organic standards in the 1960s (shows they’ve been in the game a long time). They have specific standards related to different types of soil use (shows they are thorough).

Some key points for the farming and growing standards pertinent to soybeans include: yearly inspections, 95-100% organic ingredients, high conservation values, enhance biodiversity, prevent environmental contamination, use resources responsibly (ie renewable energy, energy efficiency, water use etc), ensuring that the soil is nourished from the natural soil ecosystem and prohibiting the use of peat (peatlands store 1/3 of the worlds soil carbon, which is released with harvest), guano (damaging to human health) and calcified seaweed as fertilisers. This is great and is a reasonable guarantee of sustainable soybeans, ignoring the distance they travel, but more on this later. They also make sure that their beans are 46% protein, which is higher than the average 36%. This means that this product could contribute to the change in diets needed to combat soaring emissions from the meat industry.

Nigari is the concentrate of magnesium chloride, meaning it is the natural extract of sea salt. It is used to coagulate the soy to make tofu. According to Tofoo, this makes their tofu special because most brands use calcium sulphate (a chemical compound most commonly used in construction). However, I was unable to find out where they get their nigari from. I assume it is produced in Asia and imported to the UK, but this is not confirmed by Tofoo. I was also unable to find any information regarding where and how they source their water. Though not hugely scandalous details to ignore, there is more to sustainable tofu than organic beans.

The cardboard carton they use to package their tofu is recycled and recyclable (awesome). They claim that most brands use ready meal plastic trays filled with water to store their tofu. Tofoo use thermoform packaging (ie sheets of plastic are turned into 3D shapes by using heat, vacuums and pressure) instead. They argue that in this way they use less plastic and ensure that they deliver a safe product not contaminated by air but thermoform is not recyclable. Encouragingly, they recognise that plastic use is one of their biggest issues and claim to be in talks with their suppliers to use recycled or renewable materials for their packaging, since they believe there is no alternative as of yet.

Tofoo import their soybeans from Canada, and sometimes China and Italy. They argue that the largest producers of soybeans are the USA and Brazil (2/3 world supply combined), but the former only produces GM products, and the latter has major deforestation issues. According to them, Canada is the largest producer to organic soybeans. The beans are imported using maritime shipping because air travel emits greater amounts of GHGs (greenhouse gases). This is not great, because there are still emissions that contribute to climate change. Tofoo recognise this, and state that when local options become feasible, they will use those instead. They say that in Europe the climate and soil conditions are not overly favourable for soybeans, which makes growing them organically difficult. Existing farms don’t meet Tofoo’s demand. Given this, maritime shipping is the lesser evil. A study found that 2 tonnes of freight carried for 5,000 km by a small ship created 150 kg of CO2 compared to 6,650 kg of CO2 by plane.

Once the soybeans arrive in the UK, they are manufactured into tofu in a factory in Malton, Yorkshire. The beans are soaked for 24 hours and blended with water. The soy milk is then separated from the pulp, heated, mixed with the nigari and left to sit to separate the curds and the whey. The curds are removed and pressed into tofu, which is then hand cut into blocks and packaged. Most of these processes are done by machines operated by workers. I was unable to find any information in terms of energy types, energy efficiency, water use etc. I also did not find any mention of what they do with their waste and by-products. I also did not find any details on who the suppliers are, or their production processes. This leaves a gap of data regarding scope 2 and 3 emissions (indirect supply chain). It appears they mostly focus on organic beans for their sustainability claims. As I mentioned earlier, sourcing is only one part of the issue.

The Naked Block is produced by Tofoo Co, a company launched in 2016 by husband-and-wife David Knibbs and Lydia Smith. In 2016 they bought a small artisan tofu business in Malton, Yorkshire, which had been making traditional Japanese tofu since in the 1980s. In that year they started selling their products in 2000 Tesco (a major UK supermarket) and Ocado (UK online supermarket). By January 2020 they hot the £1 million mark and became the number 1 tofu brand in the UK. Not bad for a small company. Their success indicates the UKs slight shift away from meat and towards plant-based products. This is very promising.

Tofoo have aligned themselves with the healthy lifestyle movement. For example, they were part of Warner Music Wellness Week, where they shared their product and held cooking demonstrations. They also engage with their customer community with the Tofoo Legends competition, whereby customers are encouraged to create and share recipes using their products.

However, I was unable to find any details on their labour practices in Yorkshire, nor on those of their suppliers. To be certified organic, The Soil Association requires that no forced or involuntary or child labour be used, but there are no specifics that I could find. Perhaps they feel this does not need specifying because they are based in the UK, where laws in this regard are theoretically strict. In the spirit of true sustainability, however, these details need mentioning.

Tofoo require their suppliers to be certified Organic, to have a Valid IT certificate (for GM Free) and that they are tested for GM components and residues of pesticides and chemicals. I assume that this work is undertaken by the certifying agency, but I did not find any reports or confirmations. What is commendable, to deal with their soy transport problem, Tofoo have started a programme to encourage UK farmers to produce more soy.