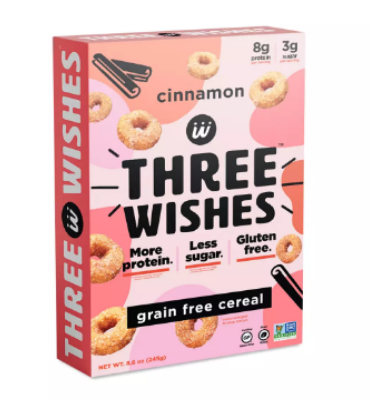 The Wishingrads, the creators of the cereal, started this journey in an effort to make a low sugar cereal that their young son could munch on. While prioritizing the human health end of their cereal, Three Wishes still has plenty of work to do in terms of environmental health. I have detailed some places where they can take steps and increase their planet rating in the future.

Three Wishes Cinnamon cereal is a low sugar, high protein replacement to other cereals on the market, such as Cinnamon Toast Crunch. Their cinnamon flavor doesn’t disappoint with a yummy flavor and super crunchy O’s. The ingredients list is also fairly simple, additionally being non-GMO verified and vegan. The three main components of the cereal base are chickpeas, pea protein and tapioca. I was unable to find any specifics about how Three Wishes sources their ingredients, so their rating will be judged on standard industry practices. Chickpeas are legumes and act as nitrogen fixers for soil, and since this is cereal, we can assume that the chickpeas being used are Desi chickpeas (instead of Kabuli). Desi chickpeas produce more seeds per pound, can be grown in sandy soil, and use less water than conventional cereal crops. This makes the chickpea relatively sustainable to grow as it is easier on environmental resources than typical cereal grains. . If not doing so already Three Wishes should try to make the most out their use of this annual crop by ensuring that their suppliers rotate it with other crops. This allows for soil regeneration and maximizes the chickpeas positive environmental impacts. Pea protein brings much of the same, the pea is also a nitrogen fixer and drought resistant. Three Wishes has a real opportunity to use their supply for good. They can start by listing their suppliers and being transparent about who they source from, then they can ensure suppliers are rotating crops in order to re-feed the soil, all while using less water intensive crops. The last main ingredient is tapioca which fairs well in poor quality soils and again is drought resistant, though it can be a driver of erosion if not managed properly. All in all, Three Wishes trades more water heavy ingredients for those which use less, but I would love to see more of an effort being put in to ensure that these crops are being utilized in a way that has a positive impact on the environment.
As for the packaging, the cereal comes in a standard plastic sleeve, and a cardboard box. My suggestion would be to get the box to made out of 100% post consumer materials and to possibly make a commercially compostable bag, or start a circular system where costumers can send their boxes back and get them refilled through a third party like Loop.

From a picture of one of Three Wishes facilities, their operations appear to be in line with the status quo. I think a fantastic place to start environmental improvement would be with an energy audit of the entire facility (or facilities) that they use. This would give them a specific break down of possible passive reductions and active reductions. Here passive reductions means no brainer solutions that usually end up saving money, such as increases in energy efficiency. Active would be things that the Three Wishes company could invest in, such as solar powered hot water heaters, or wind energy. An audit would give a personalized report on where Three Wishes can step up, rather than just giving them a ‘standard’ checklist, and hopefully have more impactful and long lasting changes.

Three Wishes was started by the Wishingrad family and is the first cereal company to be founded by a woman, Margaret Wishingrad! As a next step I would encourage Three Wishes to become B-corp certified. This is a baseline minimum for workers rights and environmental standards. Once becoming certified, they should continue to work towards employee equity and growing their positive environmental impact.