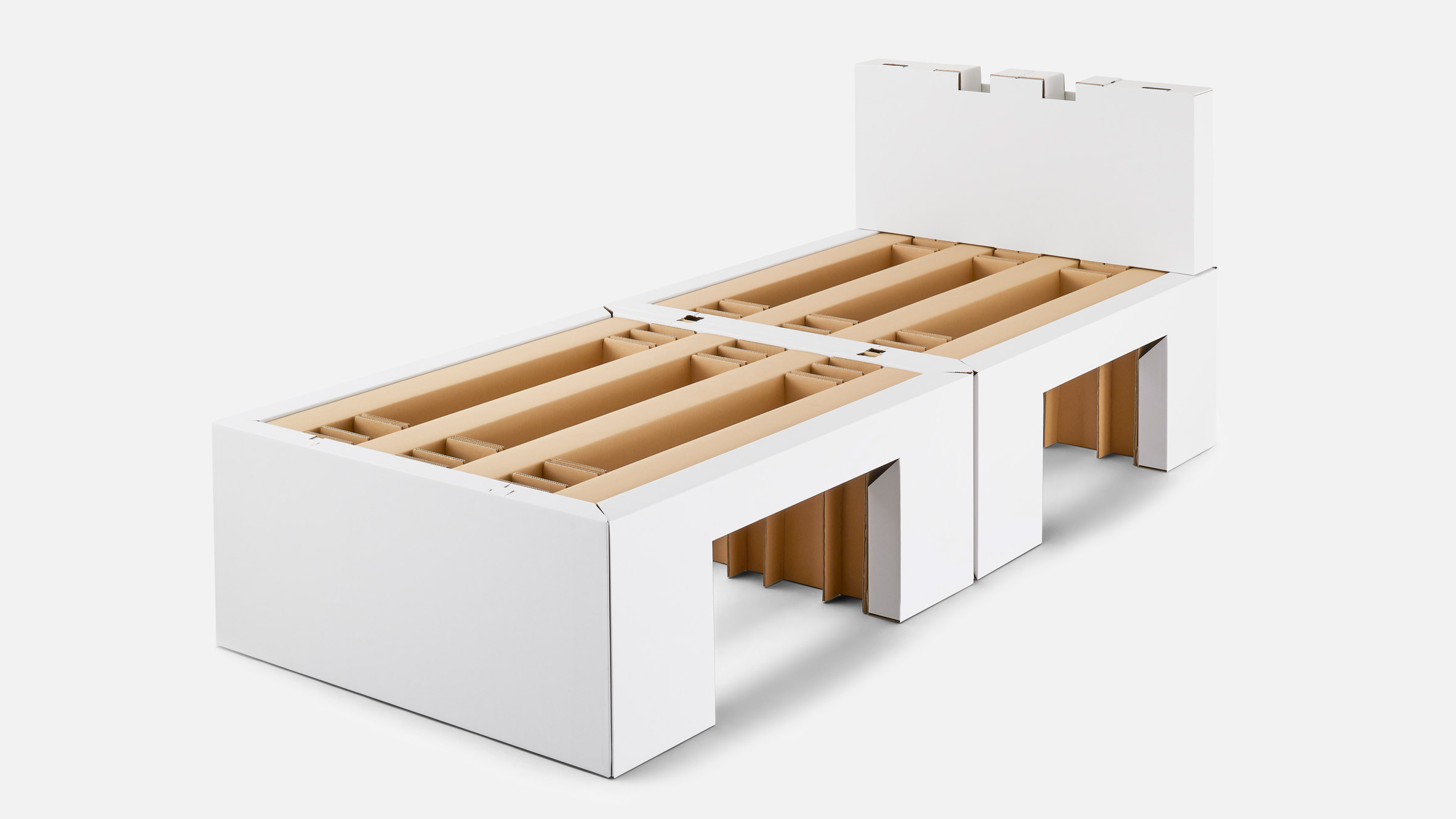 After seeing the Tokyo Olympic Games’ cardboard beds go viral on Tik Tok I wanted to see if they were actually more sustainable than traditional alternatives. The media has hailed these bed frames as a sustainable innovation, however some athletes have also voiced concerns that these beds may not be sturdy enough and might just be a sustainable fad. The bed frames are manufactured by the Japanese company Airweave, and while they are not the first bed frames to be made of cardboard, they have certainly drawn a lot of attention to this technology – hopefully people will be more optimistic about the future of cardboard furniture after this! The bed frames themselves seem extremely sustainable in terms of what they are made of and how they are produced, and I think it would be hard to find another more sustainable alternative. However, I had to lower their rating because Airweave shares virtually no information about who makes the product and their labor standards. If this was fixed, I think the cardboard bed frames would be on the way to receiving an excellent rating!

The cardboard bed frames for the Tokyo Olympics are created by Japanese company Airweave. Before the olympic games, Airweave had already created mattresses specifically for athletes, and the 2020 Olympic games were the perfect opportunity for Airweave to build this image as a leader in sustainability. The Tokyo Olympics sustainability plan outlined three methods for sustainable procurement of resources at the game: materials would either be rented out short term, when this is not possible homes for the materials were secured for after the games, or “other procurement” methods were used, which is where the cardboard bed frames fit in. Some were critical that these beds would support the weight of Olympic athletes, and that they might just sound like a good idea for sustainability instead of being a viable alternative. However, these beds have actually been proven to be stronger than steel and wood and can hold up to 440 pounds. The beds have even gone viral on Tik Tok, after athletes posted videos of themselves jumping on the beds without them collapsing.

The bed frames are made from “100% highly durable cardboard materials” according to the Olympic Games’ sustainability plan and this is the first time beds at the olympic games are made almost entirely from renewable materials. Cardboard furniture is not a new concept, but this is the first time the usage of it has been so widespread and public – this will hopefully improve the public’s perception of cardboard furniture so it can become more popular in the future! Cardboard is said to be more sustainable than other traditional materials such as wood, metal, or plastic as it can be recycled after usage, and the cardboard itself is produced from recycled materials. Additionally, other traditional materials such as timber often have negative environmental effects associated with it such as soil erosion and deforestation. The sustainability plan states that the bed frames will be recycled into paper after the games. There are 18,000 beds so that’s a lot of recycled paper! Whether or not the bed frames will actually be recycled after the games is another question – many companies often say their products are recyclable but don’t follow through with recycling after usage. However, my guess is that if the Tokyo Olympics has put this much effort into ensuring the games are sustainable, the bed frames will be recycled afterwards.

I would like to see more specific information about where the cardboard comes from, to ensure that its production does not contribute to deforestation. I assume that it does not, as this would be in conflict with the rest of the Tokyo Olympics’ sustainability plan, but they are not 100% clear about this. I understand that these beds are not produced for regular customer purchase and they are only a small part of the Tokyo Olympics’ sustainability plan, so there is not as much information about their production out there. However, I would love to see more information, perhaps on Airweave’s website, about the production of these beds: where the cardboard comes from, and how they plan to recycle them all after the games. The Olympics only started a week ago, so perhaps more information is on its way. Because of this, I’m awarding them a 2.5 for this section.

It’s great that the cardboard from these bed frames can be recycled after the competition, however, I was also curious to see whether the production of the cardboard was also sustainable. The average piece of cardboard is made from between 70-90% recycled materials, which is a lot more sustainable than alternatives! Furthermore, cardboard is often produced without the usage of dyes or bleaches; from photos, it looks like some of the cardboard in the bed frames is a white color, so I’d be interested to learn more about the dyes they use as Airweave has not shared any information about it.

Since cardboard is made from recycled materials, it takes a lot less energy to produce than virgin materials. Additionally, because of its recycled composition, the materials needed from production are normally locally-sourced, which significantly reduces transportation costs. Speaking of transportation costs, because the bed frames are so light and easy to assemble, they take up even less space and mass on transportation to the Olympic Village which also reduces emissions – an undeniable benefit! These bed frames are also extremely easy to assemble; instead of drilling or welding together frames, they are just folded and slotted together, which also means less energy is used to assemble them.

In terms of the actual production of cardboard, Airweave doesn’t share any information about their factories or the process, as this is their first bed frame made from cardboard. In general cardboard is made by converting raw materials into kraft paper which is formed by pressing, rolling, and drying a fibrous pulp. Corn starch glue is needed to “bond the corrugated medium to the liner sheets.” Looking at the production process, it seems as though corrugating the cardboard is the most energy-intensive process. Neither Airweave nor the Tokyo Olympics sustainability team shares more information about if the energy for production is renewable or if it has been offset. Even though this is not a perfect production process (it still has an impact on the environment) it is much better than any of the other alternatives! I don’t think there is another material for bed frames whose production would have a smaller impact on the environment, which is why I am awarding them a 3 for this category.

The Tokyo Olympics shares that the bed frames are made by Airweave, but beyond that there is virtually no information about who actually produces the products. In a publication which shared messages from each of the production partners for the Tokyo Olympics, Airweave said, “In our business activities related to the Tokyo 2020 Olympic and Paralympic Games, we hope to tackle various issues facing society and the global environment and promote corporate activities with social responsibility though realization of decent work and respect for international labor standards. We sincerely hope for the success of this forum.” To me, this statement is quite vague. I appreciate that they acknowledge international labor standards, but there are no specifics about their factories or what they do to ensure safe working conditions.

More generally, the Tokyo Olympics and the International Labour Organization did sign an agreement to promote socially responsible labor practices leading up to the games. This agreement merely says that, “through this partnership we are committing together to uphold respect for international labour standards for all the women and men who will work hard to make the Games a reality in 2020” and that the Tokyo Olympics will provide its partners with examples of good practices and help them implement “socially responsible labour practices.” This all seems very vague to me, and I would have hoped for more clarity in this area since the product itself is so environmentally friendly. I have to award them a 1 for this category as they just don’t share enough information about the people who make their products for me to know if it really is ethical. To earn a higher rating I think we need to see more information about their practices, labor standards, and any labor certifications the company has earned.