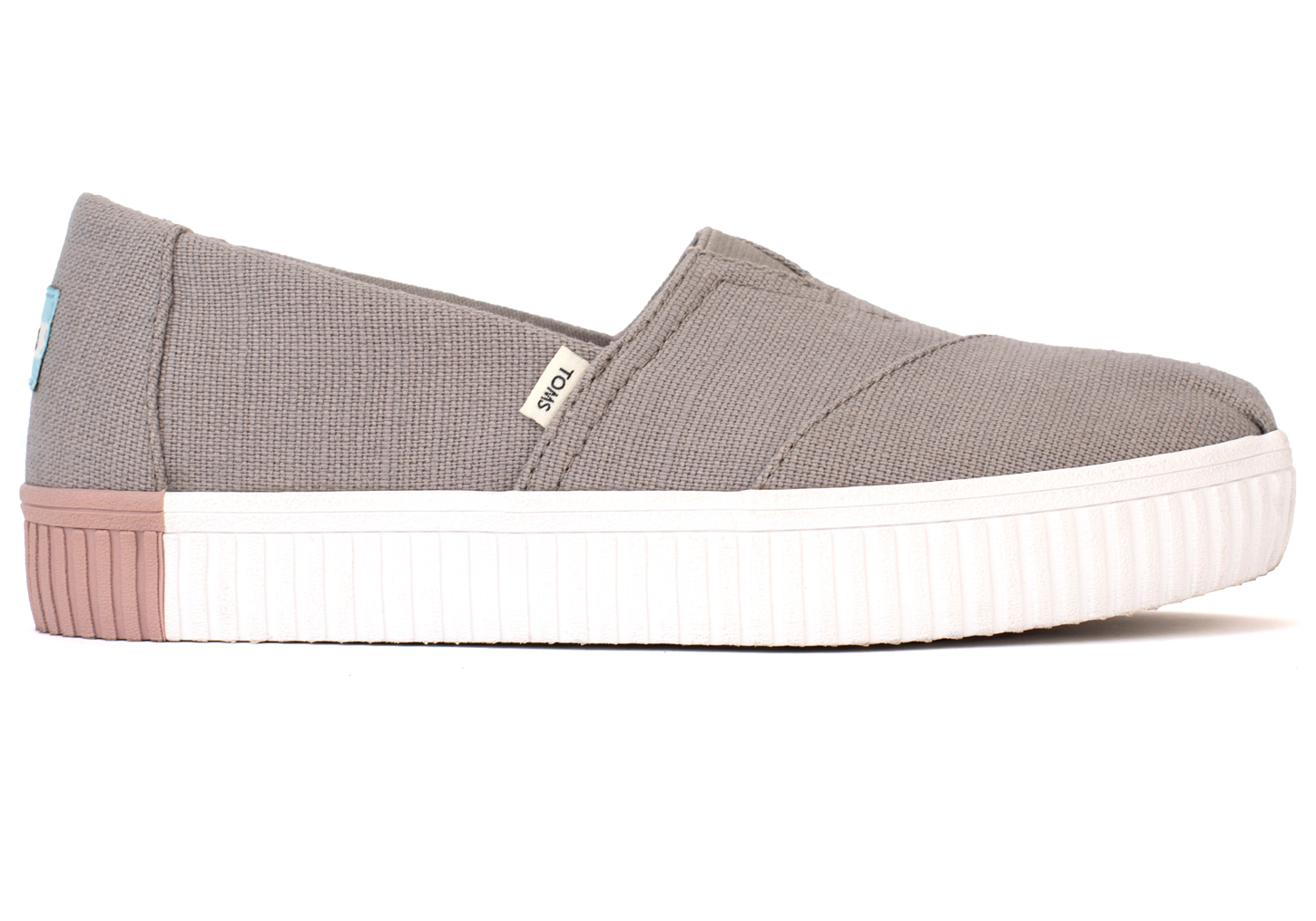 While the classic Toms shoe and its buy-one give-one mission might bring you right back to 2013, Toms is still a successful, mission based company which boasts strong commitments to equity and sustainability. Today, instead of their One for One business model, they have pledged to donate $1 for every $3 earned for a term they coined, grassroots good. This model has many benefits, and serves marginalized communities in a way in which the One for One model could not. However, Toms still has much to do to become a truly sustainable and ethical company, with rather low goals and a lack of transparency in their sustainability-focused line, earthwise™, of which the Alpargata Indio Slip On is part of. Because of this, I gave the Alpargata Indio Slip On 1.5 planets. While Toms is on the right track, it has a long way to go before its earthwise™ products and its products as a whole can really be deemed sustainable.

Toms’ product line named earthwise™, which are “products rooted in earth-friendly materials and processes” consists of 63 products at the time of this rating, which is only about 13% of Toms’ 500+ products listed on their website. While this is a start, Toms cannot claim sustainability without using sustainable materials and processes for every product. In addition, the qualifications a product must have to be part of the earthwise™ line is quite low. Toms states, each product must have at least one of its main components contain “earth-friendly” materials, and at a minimum percentage. Examples of earth-friendly materials include organic cotton, recycled polyester, sustainable viscose, and eco fibers such as hemp, linen, and jute. The minimum percentages of these earth-friendly materials required for the product to qualify as earthwise™ is as low as 26%, but averages out around 50% of the entire product. The Alpargata Indio Slip Ons are part of this line, due to it being made from primarily jute. They list on the product description that jute is a preferred eco fiber, using fewer chemicals and less water than traditional fibers use to grow. While jute is a documented sustainable fabric, consumers cannot know how much jute is actually used in the shoes, beyond the minimum 50% listed. There should be more transparency about the exact products’s qualifications in regards to earthwise™, as well as much higher standards. One sustainable component of a shoe with undoubtedly many components does not automatically make it sustainable.

Toms does a lot of online orders after shifting away from selling in person at big retailers like Macy’s. Because of this, the packaging their products are sold in is an important factor to look at. An online order-based company requires more transportation to get products to where they’re going on average, which contributes to a higher carbon footprint. However, Toms states that they have redesigned their packaging to reduce the amount of cardboard in each box, as well as switching to 90% recycled tissue paper. Their product packaging is entirely plastic-free and recyclable, and made with over 80% recycled material and also uses soy-based inks. They are also committed to the conservation standards of Canopy, a non-profit which works with major corporations to source their wood-based materials from sustainably managed forests. This makes them Forest Stewardship Council (FSC) certified.

Toms is a member of the Fair Labor Association (FLA), and is in the process of becoming accredited. This is an important step showing their ongoing commitment to fair labor practices. In addition, Toms is transparent about its factories, having a list of all its factories, with addresses, parent companies, and number of employees available to consumers. This is something I have not found with other companies, so I was very impressed with this list. However, almost all of the factories are in China, which reveal Toms is creating a significant carbon footprint by needing to ship all of its products from China to the US, where the majority of its sales are done. In addition, I could not find where any materials are sourced, except for the aforementioned sustainable forest commitment. While Toms makes a point to be transparent about part of its supply chain, the sourcing of their materials needs to be included in this.

Toms might’ve been the first mainstream company which based its entire business plan on charity. While its dedication to global philanthropy was definitely commendable, it faced worthwhile criticism. One study came out after Toms’ huge boom which found the donated shoes had little effect on improving circumstances for those they were donated to. There were also many criticisms that Toms’ donations were negatively impacting the communities they were meant to help, by pushing shoe companies in the Global South out of business due to the inability to compete against completely free shoes. Personally, I visited a market in Haiti in 2017 where I observed thousands of Toms shoes being sold, a sign that the shoes were not going to people who could not afford shoes and needed help the most. These negative impacts play into a bigger picture- many charities and philanthropic corporations (especially for-profit ones) are shortsighted and don’t have the impact they say they have, instead just using their charitable aspect as a strategy for more profit. Think greenwashing, but for charitable donations. However, since their new impact strategy in 2019 outlined in the overall section, Toms has moved away from their initial model, and moved to a strategy they call grassroots good. Grassroots goods is outlined as donating one dollar for every three made to grassroots organizations primarily in the US. There three key areas which they have decided to focus on is mental health, access to opportunity, and ending gun violence. This is a huge shift from their previous donations of millions of shoes to the Global South. While is is now excluding those countries and primarily focusing on the US, the decision to work with local, grassroots organizations is in my opinion, a good one. In addition, a frequently cited accreditation for companies, B Corps, has ceritfied Toms. This means it has met standards in social and environmental performance, public transparency, and legal accountability, determined by the organization. Since their first accreditation in 2018, they have improved from a 96.3/200 to a 121.5/200. The minimum standard is a 50, so this reveals Toms is doing very well according to their standards, as well as actively improving.