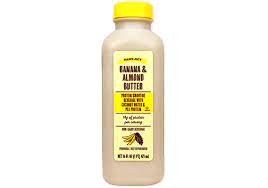 Overall Rating: 1
The greatest concern with this smoothie is the lack of transparency around the production and manufacturing processes. Trader Joe’s advertises itself as a neighborhood grocery store while sourcing its products from outside suppliers, none of which are disclosed. Without this information, there is no way for the consumer to know the environmental impact this smoothie has. Hopefully this brand will make strides to be more transparent with so it can appeal to its environmentally conscious customer base. Most of the ingredients in this smoothie can be produced sustainably, except for almond butter which requires large quantities of water and sometimes pesticides. This product is a delicious source of protein and is affordable, priced at only $2.99, but if it’s possible, choose a protein smoothie without almonds to lower your environmental footprint.

The main ingredients in this smoothie are water, coconut water, banana puree, almond butter, and pea protein powder, making it an an excellent source of fat and protein. Almond butter is notoriously unsustainable because of its large water usage - a single almond needs 1.1 gallons of water. Additionally, if the almonds used are not organic, then there is high probability they were produced with pesticides. Switching almond butter with an alternative would substantially increase the overall sustainability of the smoothie. Pea protein has a low environmental impact because growing peas uses “one tenth of the water of many other protein sources” and uses minimal fertilizers since peas enrich the soil through nitrogen fixation. Coconuts are also somewhat sustainable since they are grown without heavy machinery or pesticides. The Trader Joe’s company website indicates that their label products are sourced from Non-GMO ingredients which contributes to their sustainability in this category. Lastly, the smoothie is packaged in High Density Polyethylene which is recyclable.

Because the public does not have information about the production or manufacturing processes, there is no way of knowing for sure what goes into the making of this smoothie. The container does state that the beverage has been pasteurized, a process that involves sterilization by applying heat. It is important to consider the carbon footprint of transporting the ingredients and the product itself. Two of the main ingredients - bananas and coconuts - require a lot of fossil fuels because they need to be transported across the world. How sustainable this product is depends on farm and labor conditions of where they source from but this information is not disclosed. For instance, a banana that is grown organically is much more sustainable than a banana grown using pesticides.

Trader Joe’s sells the majority of its products under its own label, making it difficult to tell who supplies them. Trader Joe’s makes it a point to buy its supplies directly from growers and/or manufacturers, so it avoids the distribution process altogether. However, because there it little to no information about its sourcing, it makes the company as a whole not transparent. Trader Joe’s does not have an official sustainability report available to the public, only a list of initiatives related to food packaging and waste found on the company website. While this is a start, the company needs to disclose its greenhouse gas emissions and other metrics of environmental impact to be considered sustainable. The company also received the lowest score on the Environmental Investigation Agency’s Climate-Friendly Supermarket Score because it “has made no public signal of progress on refrigerant management or adoption of HFC-free technology, despite a 2016 EPA settlement in which Trader Joe’s violated the Clean Air Act by leaking ozone depleting substances”.