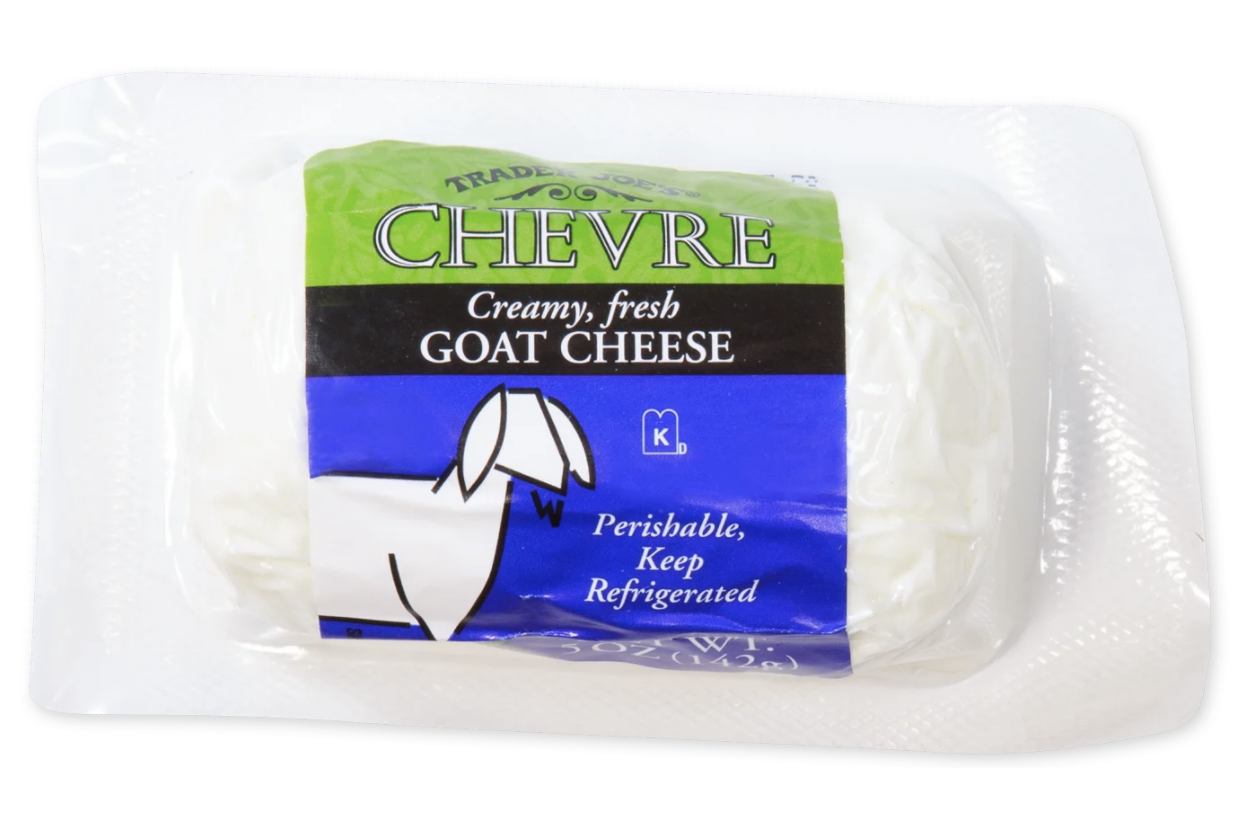 I often shop at Trader Joe’s for their healthy food options and reasonable prices. Since I eat so much of their food, I wanted to review a product from this store. Because this product is made using goat’s milk, I believe it is a good alternative to cow’s milk cheeses, as goats aren’t usually farmed in huge factory-farms like cows are. However, when I went to look at where Trader Joe’s sources the goat milk to make this product, I could not find anything. Trader Joe’s is not transparent at all about their suppliers, which made it really hard to determine the environmental impact of this product. As a company, Trader Joe’s has great programs that help reduce food waste and feed the community. However, the sustainability promises they make fall flat when looking at the reality of their products as well as their lack of transparency.

This product only has three ingredients: cultured pasteurized goat’s milk, salt, and microbial enzymes. I was interested in finding out about the environmental impacts of goat’s milk as opposed to cow’s milk, which is what most cheeses are made out of. Goat’s milk has its drawbacks, but in my opinion, it is a better alternative to cow’s milk. Goats will eat pretty much any plant—they often eat the protective layer of bark from trees and nutritious species of plants that are usually left alone by cows. This results in a loss of biodiversity and reduces the number of native plants in the goat farm region. This is problematic, as native species are already threatened by large-scale agriculture. Goats also range over a wider area than cows, which causes vegetation loss over a large area. However, this problem could be easily countered by proper management of a goat herd. Still, goats are beneficial in areas prone to wildfires, as they reduce the amount of vegetation present as fuel for the fire. They also help disperse seeds of a variety of plant species, including native species. In addition, goats use feed and water more efficiently than cows, meaning that fewer resources are required to obtain goat’s milk. Overall, I think goat’s milk is more sustainable than cow’s milk just because of the smaller scale on which it is produced. Since goat’s milk isn’t as popular, the demand for it is much lower. Therefore, goats are raised in smaller farms instead of large-scale dairy farms like cows, which is much better ethically and sustainably speaking. I’m not going to go in-depth as to why dairy farms are bad here, but I’ve linked a website that talks about it below.

I also want to note that this product is packaged entirely in plastic. This is not surprising, however, which I’ll talk more about in the next sections.

Unfortunately, I was barely able to find any information about how this product is made. Trader Joe’s is not transparent at all about where they source their food from. They sell most of their products under their own “Trader Joe’s” label, but these products could just be resold from bigger suppliers. For example, due to a product recall, we know that one of their products was sourced from PepsiCo. While I’m not sure where their goat’s milk comes from, the Cornucopia Institute gave Trader Joe’s cow’s milk a score of 0 due to their complete lack of transparency, but verified that some of Trader Joe’s milk does come from a big factory-farm. Hopefully, their goat’s milk is not sourced from such suppliers, but I can’t be sure. I do know that Trader Joe’s carries goat milk from Summerhill Goat Dairy, which may also be used to make their goat cheese. Summerhill seems to be a smaller farm that treats its animals ethically. They are also powered by renewable energy. I don’t want to go into too much detail about them, though, since I don’t actually know if Trader Joe’s uses their goat milk to make this product. Due to the total lack of information, I had to give this product a 0 in this category.

Trader Joe’s was founded by Joe Coulombe in Pasadena, California. They are still headquartered in California, but have stores across the U.S. By buying directly from suppliers and keeping advertising to a minimum, Trader Joe’s generally has lower prices than other grocery stores which I think is great, as everyone should be able to afford high-quality food. Despite the extensive sustainability framework found on their website, Trader Joe’s is not great for the environment. They do have some great programs, including when in 2012, they decided to only use sustainably sourced fish in their products. Trader Joe’s also composts and recycles much of the material they use and try to reduce plastic in their packaging. They claim to have reduced 2 million pounds of plastic packaging—a great effort, but they need to do more. The last time I went shopping at Trader Joe’s, every single product had some component of its packaging that was plastic, if not all. In 2016, Trader Joe’s had another sketchy encounter with sustainability. The U.S. accused the company of violating the Clean Air Act because their refrigerators were leaking R-22, a  potent greenhouse gas much worse than carbon dioxide that was being used as a coolant. Trader Joe’s did make some important changes, maintaining a leak rate below the grocery store average (but still pretty high—12.1%) and using less harmful substances to refrigerate their bigger stores. However, Trader Joe’s lack of transparency is the biggest problem for me. It makes it impossible for consumers to know if their food is coming from big corporations and to determine its sustainability.

While Trader Joe’s is lacking on the sustainability front, their diversity and community programs are commendable. They provide two scholarship funds for their employees—one specifically for Black employees and one for all employees. They also claim to be increasing the number of Black-owned suppliers they have. They also want to build their new stores in diverse neighborhoods, where they say they will hire people from the community to build, supply, and provide art for the stores. While this could provide disadvantaged people with access to better food, it could also put locally-owned grocers out of business. Lastly, I think Trader Joe’s best program is their Neighborhood Shares program. In major cities, they donate unsold products to local food recovery organizations. On their website, Trader Joe’s says that 99.5% of all of their products are either sold, donated, or composted. While the breakdown of this percentage is not available, I think it is great that they are making an effort to feed the community and reduce food waste. For example, in Los Angeles, Trader Joe’s stores partnered with FoodCycle LA and LA Regional Food Bank to donate their products.