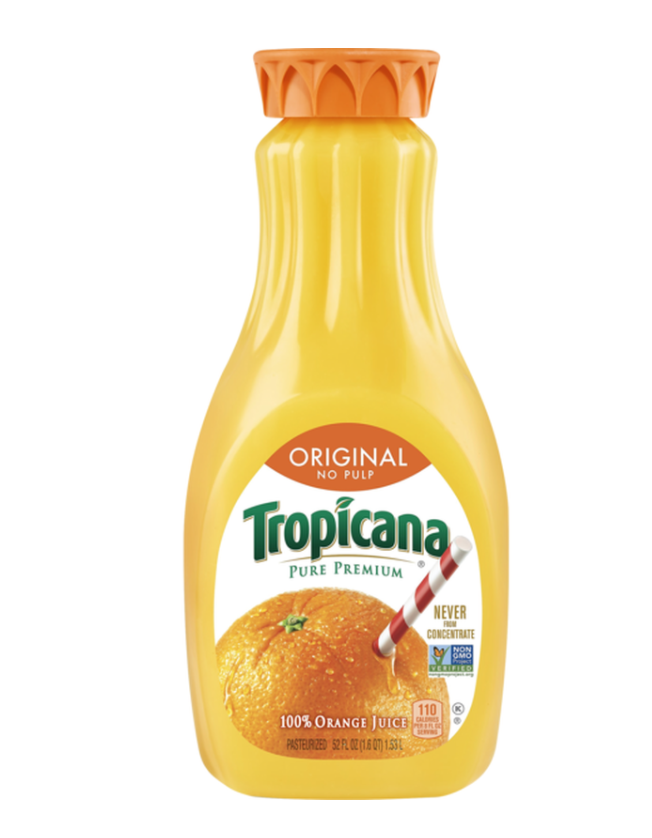 Tropicana advertises its juices as being all natural and pure. In reality, they are “heavily processed, colored, and flavored”. This false advertising is the reason behind why consumers have filed dozens of lawsuits against the company over the past 20 years. Tropicana, under PepsiCola, is making strides toward sustainability. For instance, it established a Sustainable Farming Program which requires supplier farms to meet select criteria aimed at lowering their environmental impact. Nevertheless, Tropicana’s orange juice production is unsustainable and the finished product is not particularly healthy, containing almost as much sugar as coca cola. With all of that in mind, it is better to buy organic orange juice and it is best to buy it from a local farmers market or make it yourself.

According to the label on the bottle, there is only one ingredient in Tropicana Pure Premium Orange Juice: oranges. It takes 14 oranges to produce a 52 oz bottle of Tropicana Pure Premium Orange Juice. There is controversy behind this ingredient because it suggests that there are nothing added to it, which is entirely not true. Oftentimes the juice loses its natural flavors when it goes through a process know as deaeration (oxygen removal), so Tropicana adds flavor packs to them according to MelMagazine and other sources. However, “flavor packs aren’t listed as an ingredient on the label because technically they are derived from orange essence and oil”. This is concerning because it means the company is not fully transparent with its costumers. Orange juice may support a healthy immune system as it a source of potassium, thiamin, folate, and vitamin C. Unless freshly squeezed at home, orange juice loses the full spectrum of vitamins and antioxidants found in oranges. Unlike sugar in oranges, sugar in orange juice has been linked to Type 2 diabetes and obesity. The juice is packaged in plastic or waxed cardboard, both which are recyclable, but unfortunately, not biodegradable.

The label indicates that the oranges used to make the juice are from the U.S. and Brazil. Oranges are harvested from groves and transported to a juice processing plant where they are washed and squeezed. The juice is pasteurized (heated to ensure safety for consumption), deaerated (stripped of oxygen so it doesn’t oxidize), put into aseptic storage tanks, packaged, and transported to stores. Orange groves are energy and water intensive systems and they are where the majority of the environmental impact comes from. First, the conversion of natural habitat for the creation of these monocrop plantations results in loss of ecosystem function and biodiversity, as well as soil erosion. Second, the application of pesticides and fertilizers are harmful to the surrounding environment and communities. Additionally, fertilizers are a huge contributor to nitrous oxide emissions, a greenhouse gas 300 times more potent than carbon dioxide. One positive aspect is that the orange juice is “produced without genetic engineering and its ingredients are not derived from GMOs”, as indicated by the Non-GMO Project seal on the product. Farmworkers are often exploited, underpaid, and vulnerable to poor working conditions. There is also evidence of child labor in Brazil in the orange-picking industry.

Tropicana is an American multinational company who specializes in branded fruit juices. The company was acquired by PepsiCo in 1998. Through PepsiCo’s Sustainable Farming Program, nearly 80 percent of its “directly sourced crops”, including oranges, were sustainably sourced in 2019. PepsiCo is making an effort to adopt sustainable agricultural processes, such as cover crops, drip irrigation, and Integrated Pest Management. While the company should continue to lower its environmental impact, one must remember that as of right now, it is responsible for greenhouse gas emissions, plastic waste, habitat destruction, and human rights abuses on a large industrial scale. And the majority of its products are bad for one’s health.