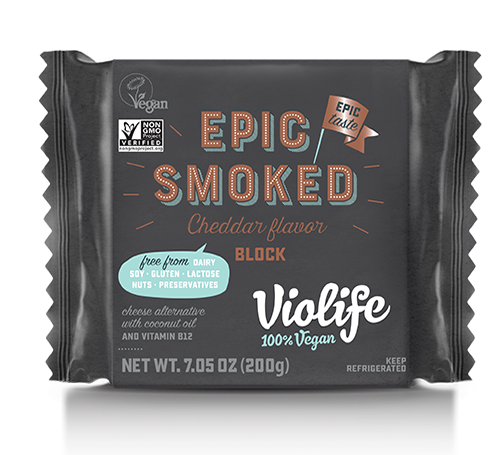 This product deserves credit for being a viable alternative to a product that perpetuates animal cruelty. I eat a block of it every week, and it arguably tastes better than regular cheese. It also melts similarly, which is sometimes not the case with vegan cheese. Its ingredients are not as environmentally harmful as some of the vegan alternatives. The companies that produce the cheese leave some things to be desired, however. It is disappointing that none of the ingredients appear to be organic, for example. As the largest supplier of plant based products in the world, Upfield has the resources to lead the industry in sustainability. It has demonstrated an interest in sustainability, but the authenticity of this interest would be less questionable if the company more clearly defined its sustainability goals. It will be interesting to see what information Upfield’s annual sustainability report contains if and when it comes out. The product would also be more credibly sustainable if Violife’s website contained information about sustainability commitments rather than consumers having to research its parent companies. Overall, this product is somewhat sustainable with the potential for significant improvement in the near future depending on how its producers follow through on their commitments.

This block of cheese contains no animal products. The ingredients are: Filtered Water, Coconut Oil, Food Starch-Modified (Potato & Corn), Potato Starch, Salt (Sea Salt), Organic Ground Sunflower Kernel, smoked Cheddar Flavor (vegan sources), Lactic Acid, Olive Extract, Beta Carotene (Color), Vitamin B12. Violife and its parent company Arivia make no mention of where they source their ingredients on their company websites. Arivia’s parent company, Upfield, does not provide consumers with a list of specific suppliers either. Without a list of suppliers, there is no way for consumers to understand where Violife’s ingredients come from without contacting the company and requesting more information. Consumers can make some judgements based on the ingredients alone, however.

The most environmentally impactful ingredient in Violife’s vegan cheese is either corn starch or coconut oil. Corn cultivation does not typically threaten areas of high biodiversity, but pesticide use, monocropping practices, and the high nutrient requirements of corn result in environmental contamination and depleted soil. Coconut oil production takes place in areas of high biodiversity, and the cultivation of coconut palms can contribute to the loss of mangrove forests. Coconuts are less likely to be grown as a monocrop than corn, however, and they do not require pesticides. The other ingredients are relatively sustainable. Sunflower and olive cultivation are far less intensive than corn and take place in areas of lower biodiversity than coconut farming does. Potato cultivation is also less resource intensive than grain and does not threaten biodiversity to the same extent as farming that takes place in tropical rainforest. Potato cultivation is also an efficient use of arable land because of its high yield. The inclusion of vitamin B12 is good for the health of consumers. B12 can be a difficult nutrient for people on a vegan diet to get enough of, so fortifying vegan cheese with it makes it easier for vegans to ensure that their diet meets their nurtritional needs. Although the ingredients used in Violife’s vegan cheese are not perfect in terms of sustainability and their credibility would benefit from greater transparency, they are far better than animal products. Keeping livestock is more resource intensive than any crop and they often endure severely inhumane conditions. The decision not to include palm oil or soy also contributes to the sustainability of this product.

The process of making vegan cheese is similar to the one used to make cheese from animal milk in that it involves time and microbial cultures. Bacteria seperate the plant proteins, starches and oils are used to thicken the cheese to its desired consistency, and the cheese is aged further. Vegan cheese requires additional flavoring in order to taste as cheeselike as possible because microbial activity does not create the same bonds between plant proteins as it does between animal proteins. There is nothing particularly unsustainable about the process of making cheese, and the product might score higher in this category if Violife or its parent companies shared any details of the process with consumers. The degree of mechanization and sources of energy would be useful information, for example. This could be as simple as a video explaining how the cheese is made, giving a tour of the factory where the cheese is produced, and explaining how different aspects of its production affect sustainability.

Violife is a subsidiary of Arivia S.A, which in turn is a subsidiary of Upfield. Both Violife and Arivia are headquartered in Thessaloniki, Greece. In 2018, Unilever sold Upfield B.V to KKR investment group. In 2019, Upfield aquired Arivia and Violife was included in the deal. Upfield is now the largest plant based food manufacturer in the world. The company website is more informative than those of its subsidaries, but still leaves something to be desired. Upfield provides information about its responsible sourcing policy as well as a human rights statement, but stops short of showing its work. Without a way for consumers to verify how the company is upholding its professed values, they are left to either remain skeptical or take the company’s statements at face value. According to the statements available on the company website, suppliers must adhere to local and international law while engaging in ethical employment practices as well. Without a list of suppliers, there is no telling whether Upfield actually enforces its stated policies. The company promises to be sustainable, but so far offers little actual evidence of how it is making improvements. Furthermore, some of the supplier terms do not seem to be very meaningful in the first place. Demanding that suppliers pay the local minimum wage does not have the same implications as demanding that workers earn a living wage. Requiring compliance with local laws and paying lip service to land or labor rights is better than not doing so, but not as good as providing hard evidence of that commitment. Upfield committed to publishing annual sustainability reports in May of 2020, however. If they follow through on this committment, it will give their sustainability claims more credibility.