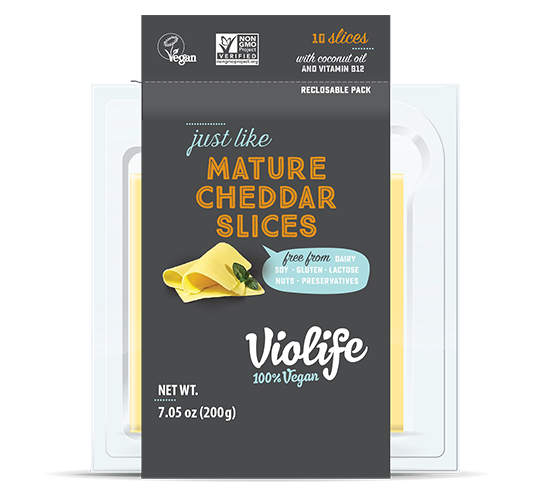 I was quite disappointed with the information that was available about Violife and their products. The general lack of reporting and transparency was the biggest red flag, and it doesn’t allow me to appropriately rate the ‘Just like Mature Cheddar slice's' despite their innovative product which is very popular in the plant based dairy analogue industry. I would love to see much more information about the way that they create their cheese, as well as how they intend to follow through with their sustainability commitments by incorporating sustainability into their supply chain and transportation process.
If you are vegan and are primarily interested in maintaining a plant based diet, I would recommend Violife as a popular and fairly realistic (although somewhat oily) cheese substitute, especially as it contains B12. The same goes for individuals with specific allergies or lactose intolerance. However, for those who just want to make changes to their diet to reduce their environmental impact, I wouldn’t necessarily recommend Violife just because they are vegan - there are serious issues with their transparency and the emissions produced by the substantial food miles which Violife needs to address. Additionally, due to KKR’s stake in the oil and gas industry, there are clearly conflicts of interests in the parent company structure with regards to sustainability which also raise questions about their possible commitment to sustainability.

The first positive of Violife’s products is that they are all totally plant based and vegan, and do not contain dairy, preservatives, casein, lactose, gluten, nuts or soya. This means that all of their products are free of many common allergens, and by not using animal products they avoid contributing to the extremely significant quantities of greenhouse gas emissions and environmental issues like deforestation which are associated with the livestock and dairy industries. It is commendable that Violife has been able to create cheese analogues which are pretty realistic without using many of these products.
The main ingredient of all of Violife’s products is coconut oil. It is additionally fortified with Vitamin B12. This is significant as providing sources of B-12, which is generally sourced in animal products, is really important when following a plant based diet.The other ingredients of the cheddar slices include starch and modified starch, salt, cheddar flavouring, olive extract as well as coloring (paprika extract and B-carotene). The majority of these products can be sustainably produced without significant land usage or emissions, which is great. Additionally, all of their products are all certified Vegan, Kosher and Non-GMO verified.
However, the nutritional value of the cheese however is fairly low. Coconut oil is very high in fat, and thus the products contain very high quantities of saturated fats, as well as sodium. One slide of the Just Like Cheddar Cheese alone contains 21% of your daily saturated fat content!! Although, they do have quite high protein content, I wouldn’t really consider Violife cheddar slices to be particularly nutrient dense if you are concerned with health. However, when compared to real cheddar, the overall fat content is lower, although a much greater proportion is represented by saturated fats. Additionally, it is a more low calorie option.

One of the reasons that I was excited to review Violife is that it is one of the few vegan cheese options available where I live (in Serbia). This is mostly because the company is based in Greece and the majority of their products are produced in Greece, and thus readily available in the Eastern Europe region. However, Violife is distributed worldwide, and is available throughout Europe, Asia, Africa and South America as well as in North America, as they have recently established a factory in Canada. I think it is great that Violife have made vegan alternatives available in countries where they are not typically or readily available. However, they do not disclose how they transport all of their products around the world. I have only been able to find evidence that they ship their products to various ports around the USA using shipping port logs. While this is better than flying their products, there are still very significant food miles in this process. The transportation of the product is likely to result in significant GHG emissions, so I am very disappointed that they are not transparent about this part of their supply chain, or any attempts to mitigate the impact of this process.
Additionally, although they do state that they source coconut oil from “suppliers who are against animal cruelty”, they provide no further detail about how they source or transport the requisite volumes of coconut oil (as coconuts are not a native plant to Greece) to produce their products. This lack of transparency is evident throughout the supply chain and production process, as they do not disclose how their product is actually made. I was unable to find out their actual process of turning coconut oil into cheese, however, using other sources I could figure out the general process of turning oil into cheese. The key to the process is fermentation and protein extraction, in which modified starch (not to be confused with GM-starch) helps turn the oil into a solid with a cheese like consistency, into which artificial cheese like flavouring is added. This process is very innovative and much less land and water intensive than producing actual dairy cheese. However, there is little information available as to where they produce it, and in what facilities.
Overall, I think that the greatest source of emissions and threat to sustainability originates from the very long supply and procurement lines in their production process, and the lack of transparency regarding their supply chain and suppliers means that their performance is overall disappointing.

Violife is a Greek Brand, which is owned by the plant based food company Arivia, also based in Greece. Arivia was bought by Upfield (which was formed as it branched off from Unilever) in 2019, who are in turn owned by KKR.
Upfield is the largest plant based food company in the world. They own a range of different plant based food companies which distribute globally, such as Flora, Rama, Fruit D’Or, ProActiv and others. They were originally created as an offshoot of Unilever. Their effort to popularise and commercialise plant based options so that they are widely available is really important, however there are yet again questions raised about transportation and production. Upfield also boasts that they are certified as using 100% Sustainable palm oil. However, they make a lot of other promises such as only using responsible procurement and reducing their plastic packaging which there is little visible evidence for on their website. A lot of their goals have not yet been achieved, such as “By 2025, all of our new containers will be plastic replacements which will be reusable, recyclable or certified compostable”. However, for the time being Violife’s packaging is still made of plastic, so they seem to have a long way to go before reaching these very basic commitments. This is very disappointing for a company commited to plant based foods and apparently sustainability.
It is very interesting that KKR, the American investment firm that effectively owns Violife, has been working on their sustainability profile and advertises this widely. However, they also boast about their investment in the oil and gas industries. Therefore, I believe their choice to invest in Upfield and Arivia and thus Violife may be an attempt at corporate social responsibility improving their SDG profile, and somewhat greenwashing their portfolio. However, this does not mitigate their stakes in non-renewable energy and the environmental damage mining for these resources causes. It is thus very clear that they are not particularly concerned with sustainability, which is concerning as their interests will likely predominate due to the large investment of over €6.8 billion that they spent on Upfield... This is another disappointing example of parent companies which have interests which conflict with the companies that they own.