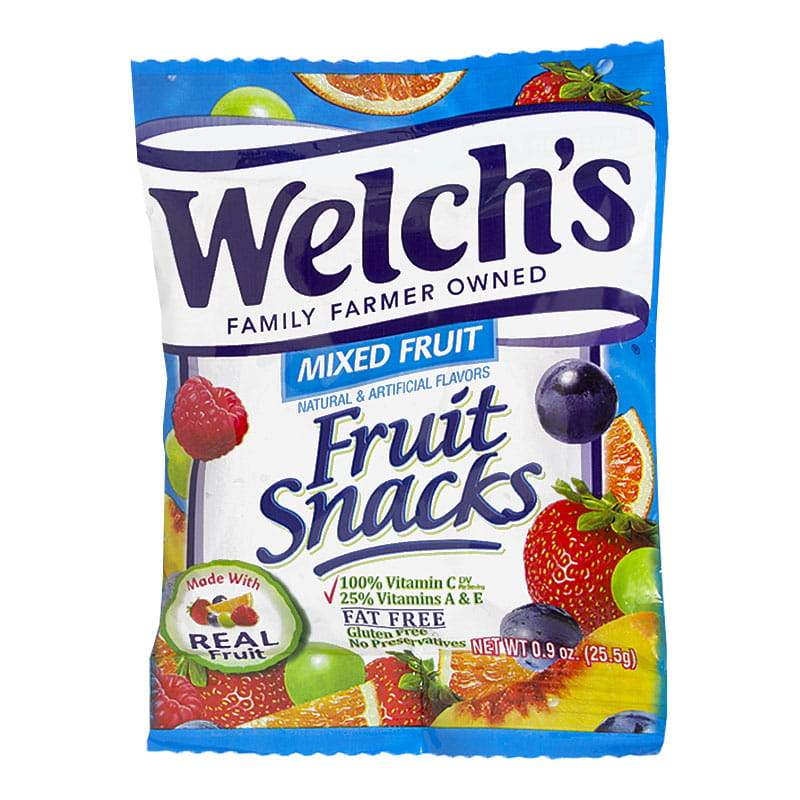 Whether you’re on the go or seeking something sweet to snack on, fruit snacks can be a delicious option. Founded in 1869, Welch’s has become a company that families rely on internationally for products such as their juices, jellies, and, of course, fruit snacks. While the Welch’s Fruit Snacks advertise that fruit is their first ingredient, the product is extremely processed, with many different ingredients needed to produce it. Overall, I was very disappointed in the sustainability of the product between its ingredients, manufacturing processes, and labor practices. In addition to being more transparent, Welch’s will need to adopt better and more ambitious sustainability goals, including switching to renewable energy throughout the entire manufacturing process of their fruit snacks. Welch’s also needs to work on getting more sustainable ingredients as well as adopting stricter and more inclusive labor practices.

Welch’s fruit snacks are made from fruit puree (grape, peach, orange, strawberry and raspberry), corn syrup, sugar, modified corn starch, gelatin, concord grape juice from concentrate, citric acid, lactic acid, natural and artificial flavors, ascorbic acid (vitamin C), alpha tocopherol acetate (vitamin E), vitamin A palmitate, sodium citrate, coconut oil, carnauba wax, annatto (color), turmeric (color), red 40, and blue 1. Welch’s says that they get their grapes from family-owned vineyards that are managed less intensively than other crops and fruits, resulting in less soil disruption and greenhouse gas emissions. However, they don’t say where they get the rest of their fruit purees, only sharing that all of their fruit purees are non-GMO compliant. Without knowing where the rest of the fruits for their fruit purees are grown, it is hard to say whether their farming practices are entirely sustainable. Corn syrup and modified corn starch are both very unsustainable ingredients because farming corn requires large amounts of water, pesticides, and fertilizers, resulting in water pollution and nutrient-depleted soil. Corn production also requires large amounts of oil to make the pesticides, fertilizers, and tractor gasoline, and to harvest, dry, and transport the corn. Sugar is another unsustainable ingredient because it requires large amounts of water to grow. Gelatin is made from a protein that is found in the tendons, ligaments, and tissues of mammals, requiring the tissues, bones, and skins of animals such as cows and pigs. Therefore, producing gelatin requires large amounts of land for both the animals as well as their feed, resulting in deforestation. Welch’s has also confirmed that they use both pork and beef gelatin in the production of their fruit snacks. Citric acid and lactic acid are both used as preservatives in this product. The “natural and artificial flavors” used in this product are unknown and the term is extremely vague, making it difficult to be able to judge the sustainability of these particular ingredients. The sustainability of coconut oil depends on how it is farmed, so it is also difficult to determine the sustainability of this ingredient. Coconut oil can have an impact on biodiversity as well as deforestation. The sustainability of carnauba wax is also hard to determine without knowing how the product is harvested. Many farmers over-harvest the tree that this wax comes from which has environmental consequences on the surrounding land. Annatto and turmeric are both used to color the product and are relatively sustainable since they do not significantly damage the environment as long as pesticides are not used on the plants that these ingredients are harvested from, as pesticides can contaminate air, water, and soil. Red 40 and blue 1 are both derived from coal or petroleum, which both emit large amounts of greenhouse gases into the atmosphere, making these ingredients unsustainable. Not only are almost all of the ingredients in Welch’s Fruit Snacks unsustainable and unhealthy, but the fact that there are so many processed ingredients that go into making this product means that it requires a lot of energy in order to bring all of the ingredients together to make it.

Welch’s prides itself on the fact that their company is composed of family farmers that grow all of their products and claim that they are committed to sustainable farming practices. However, there is no evidence or any other examples of what this looks like, making it hard to be able to judge whether or not they are telling the truth, and are truly committed to sustainability. A lot of manufacturing and machinery goes into making Welch’s Fruit Snacks which requires large amounts of energy. Welch’s makes no mention of using or even switching to renewable energy. This is very surprising to me because most corporations nowadays have at least set goals working towards the use of renewable energy. The fact that Welch’s makes no mention of this is extremely alarming, especially since it is such a huge corporation that makes a lot of different products and, therefore, emits large amounts of greenhouse gases. In the future, I would hope to see Welch’s set out to achieve 100% renewable energy within the next decade. The cardboard boxes that the fruit snacks come in are recyclable; however, the plastic pouches that hold the snacks are not. Once again, this is very alarming, because these pouches will then produce large amounts of waste. Large amounts of plastic like that used for the fruit snack pouches also requires oil and petroleum in order to be created, which both have negative consequences on the environment. Welch’s also says that they have been using rail cars to ship their concentrate rather than trucks since 1996. Each railcar shipment eliminates 4 trucks from roadways, which they claim reduces greenhouse gas emissions. However, trains still emit greenhouse gases into the atmosphere. All of Welch’s production practices are extremely unsustainable, and they cannot continue in the ways that they do without harming the environment. Additionally, Welch’s will need to be more transparent about what their “sustainable farming practices” look like, and how they ensure that they are being followed, in order to receive a higher rating.

As previously mentioned, Welch’s receives their fruit products from family farms across North America. However, they don’t mention where they source all of their other ingredients, which is necessary information in order to determine the labor practices and workplace environment of their suppliers. They say that they are proud of their heritage of quality products and an ethical and honest culture, and that they require that their suppliers and business partners comply with laws and regulations concerning human trafficking and slavery. However, they also mention that they do not currently inspect or monitor their suppliers for compliance in this area, but are working on ways to do so in the future. This was extremely surprising and alarming to me because how can you ensure that your suppliers are following these regulations if there is nothing in place to monitor them? Welch’s needs to be able to monitor and ensure that just labor practices are being followed across their entire supply chain. Welch’s also does not mention anything about diversity, which I found to be very surprising since many companies try to emphasize their efforts revolving around diversity and inclusion. This is a little bit alarming to me because I think this is a very important aspect needed to judge a company’s workplace environment. Overall, I am not impressed with Welch’s when it comes to transparency of labor practices or treatment of their employees. I am very concerned with Welch's current labor practices and would hope to see more transparency as well as greater efforts to create a safe and equitable work environment in the future.