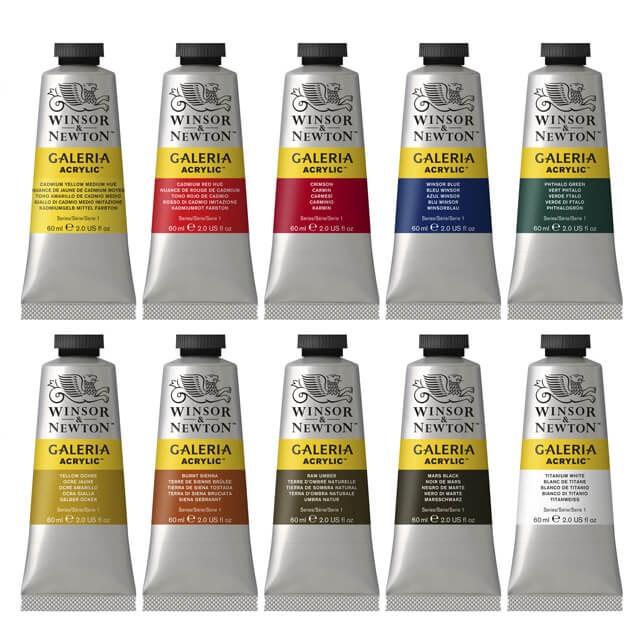 Winsor and Newton’s sustainability can be measured in three ways, firstly, by the ingredients that go into acrylic paint, secondly, by how environmentally sustainable factories are, and thirdly by who is making the product. Acrylic paint is made from the harsh chemical that is acrylic polymer, which is essentially liquid plastic. When it evaporates it releases harmful chemicals into the air and acrylic wastewater is hugely damaging to waterways. There are other eco-friendly acrylic paints, yet some of the prices are astonishingly higher than those made by these cheap products. Yet, the way in which Winsor and Newton have found ways to recycle and reduce the impact (only in factories), is reducing the damage in the long-term. Furthermore, factories creating certain aspects of different products are primarily assembled in France and England and are ethically sustainable, (whilst reducing their air miles but obviously not accountable for worldwide selling.) Consumers can ultimately look for organic and eco-friendly alternatives, yet it essentially depends on what the artist is looking for and the price – because other options are so limited. Overall, despite factories trying to reduce the impact, the chemicals in Winsor and Newton’s acrylic paints are so harsh that it is hard to ignore there are other products on the market that are much more eco-friendly. However, the long-term sustainability of their factories does majorly reduce their environmental impact and there is no evidence to show that their factories in England and France are not ethically unsustainable.

Acrylic paints contain the same pigments as oils, but their vehicle is acrylic polymer emulsion, and their binder is acrylic polymer. When they dry, the components of the vehicle evaporate—meaning that water, propylene glycol, and ammonia are released into the air. Some of the commonly added acrylic mediums also release formaldehyde as they dry. Propylene glycol, for example, is safe enough for use in the food and cosmetic industry, but has a disastrous effect in aquatic environments, meaning that pouring acrylic wastewater down the drain is damaging to waterways.
Acrylic paint is made from a synthetic resin binder - usually acrylic polymer emulsion, which is ultimately liquid plastic, which is a chemical produced by a chemical process, the thickeners, defoamers, preservatives and other additives are chemicals and even the synthetic pigments used to make the colours are chemicals. They may be present in small enough quantities that they can be labelled non-toxic and non-hazardous, but they are still there.
Furthermore, an investigation into vegan art products by ‘Give a damn’ asked Winsor and Newton about their use of animal products in their paint - a few certain colours of Winsor and Newton’s ‘professional acrylic’ and ‘Galeria’ paints are made using animal products, yet it is not mentioned what animal products, yet does emphasize they do not test on animals. In my research I found that in some of their red colours – they contain Carmine (crushed beetles) and in Ivory Black, contain charred animal bones.

The backstory of Winsor and Newton’s pledge to be eco-friendly:
Rather than simply using water and releasing it into drains, we process it and reuse it. At our brush making plant in Lowestoft in the UK we have introduced a rainwater collection system that provides a free, alternative source of water for the production process and enables us to cut freshwater consumption.
In our colour factories we have lowered environmental impact by installing technology that treats water effluent in closed-loop systems and reuses it throughout the plant, including to clean machinery.
A major priority for Winsor and Newton is reducing hazardous chemical use – a key challenge for all paint manufacturers. One area where they are working especially hard is cadmium, a heavy metal that when added to artists’ paint creates an intrinsic quality that many artists value and that is currently hard to replicate artificially. Cadmium is especially bad for the environment due to its toxicity. Winsor and Newton can be praised therefore for their introduction of cadmium-free paint.
However, there is an issue when it comes to the economic issues associated with being environmentally sustainable when using paint. Paints that do not use cadmium are usually more expensive, which can be useless to the everyday painter. Windsor and Newton professional cadmium-free acrylic paints 14ml are £22.15, whereas everyday watercolours made with cadmium are £1.25.

The majority of Winsor and Newton’s paints are now made in France (yet previously made in England until 2011). Overall, I have found little information into the actual making of these products including where the chemicals come from originally and the general ethical sustainability.