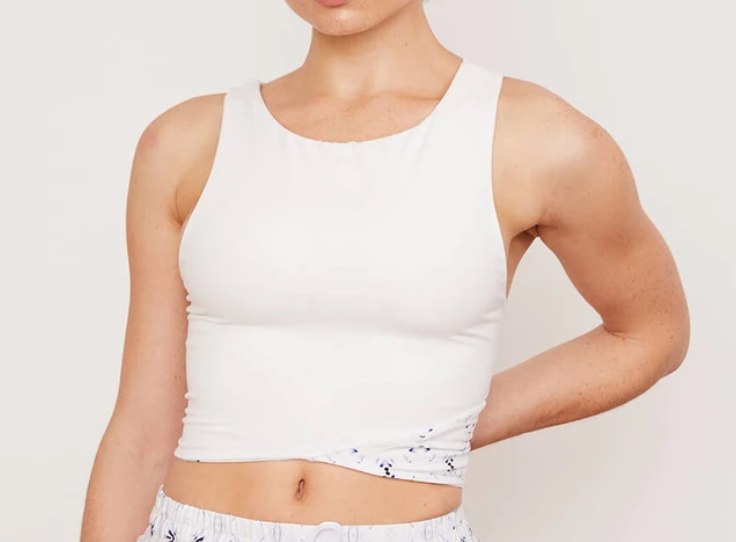 I had heard of Wolven Threads before and after seeing their creative activewear designs, I wanted to see whether all the excitement behind their seemingly sustainable fashion items was called for. After critically assessing the materials, production techniques, and transparency, I am extremely impressed with Wolven Threads’ products. The consumer certainly pays for this, with a hefty $78 just for one tank top. But if you’re looking for a company that does almost everything they possibly can to ensure a low environmental footprint, it would be Wolven Threads. Perhaps as the brand grows bigger or their practices become more mainstream, their products will not cost as much; as of right now a product like this, even with its great sustainable record, is not affordable to most. Other companies should follow in Wolven Threads’ footsteps and share similar information about their sustainable practices and educate their audience on the environmental issues they hope to mitigate in an effort to be more transparent.

The Alpine Reversible Crop Tank is made from 84% rPET and 16% spandex. Wolven Threads proudly shares information about their rPET textiles on their website and how they believe using rPET instead of virgin PET has a positive impact on the environment. They state that 2.5 million plastic bottles are disposed of every hour in America alone, and that “since plastic is indestructible” they must “find ways to reuse them.” Their solution of using rPET, which is a fiber created from used plastic bottles, certainly does something to cut down the amount of plastic bottles entering the landfill, but it is definitely not perfect. For starters, stating that a product is made from recycled plastic bottles, could make some individuals feel okay about using a lot of plastic if they know that it can be recycled into a tank top at the end of the day. Wolven Threads does a good job of explaining their motivations behind using rPET instead of virgin PET, but could do better by clearly stating that using recycled material is not an excuse to keep consuming more plastic, but instead a result of humankind’s excessive actions.

Secondly, Wolven Threads is not 100% transparent about the complete makeup of their products. They dedicate a page of their website to explaining their rPET production process, but on the product page for the Alpine Reversible Crop Tank, the details reveal that the tank is made from 84% rPET and 16% spandex; there is no mention on their website of how or where the spandex is made. Normally the process of making spandex takes a lot of energy and petroleum based products. Wolven Threads does not state whether their spandex is made in a more sustainable way, however it is possible to assume that they offset the carbon emissions of production, as they say that they offset all their production energy. Wolven Threads would do better to be more transparent about the origins of their spandex materials; even if the production of their spandex is not as sustainable as the production of their other materials, they should still share the journey of finding a sustainable alternative with the consumer.

Lastly, rPET may sound like a great alternative to plastic bottles entering the landfill, however, there are still downsides to the fiber. rPET, just like any synthetic fiber, releases microfibers when it is washed or even while it is being worn. These fibers eventually enter marine habitats and are detrimental to the organisms living there. However, unlike most fashion companies, Wolven Threads dedicates a page of their website to the issue of microfibers. They explain to their customers what a microfiber is and why it is harmful to the environment, and what they can do to help reduce them. Wolven Threads also goes further by selling a Microfiber Filter Wash Bag, which they claim will stop 90% of microplastics from entering waste water. Albeit, this $18 bag definitely adds to Wolven Threads’ revenue, but is significantly cheaper compared to other similar products in the market. But does this bag actually work? Well, the technology is relatively new so there are only a handful of studies discussing these filters. The studies say in general microfiber bags are around 54-78% efficient. Studies seem to agree that a bag does reduce the plastic entering wastewater, but disagree by how much. Therefore, I’m inclined to give Wolven Threads the benefit of the doubt because they share so much information about their sustainable practices and believe that their Microfiber Filter Wash Bag comes from a genuine motivation to reduce microfibers and not from a motivation to make more profit.

I’m giving Wolven Threads 2.5 planets for what it’s made from because they seem to go above and beyond what is expected from them. Not only do they share information about their rPET and dedicate pages on their website to this information, but they also go further and educate their customers on microfibers and attempt to help their customers reduce the number of microfibers they release when washing their clothes. They are also OEKO-TEX Standard 100 certified, meaning that their textiles have been tested for harmful substances. While Wolven Threads sets a good example, they could do better by being more transparent about the origin of their spandex and its sustainability.

Wolven Threads clearly shares on their website that they recognize that producing rPET releases a large amount of carbon emissions, however, they say that producing rPET releases less emissions than virgin PET. I fact checked this statement across scientific studies and found that it was accurate: “40–85% non-renewable energy savings and 25–75% GWP savings.” (GWP is a measurement that gives an approximation for the emissions of different gasses, the reduction of GWP here is a good thing!) What I admire about Wolven Threads is that they don’t just stop by stating that even though their products take a lot of energy to produce, it’s okay because they take less energy than the non-sustainable alternative. Instead, they dedicate themselves to offsetting their emissions and are Climate Neutral certified, meaning that this is not merely something they say they do, but they have actually been verified as carbon neutral. Wolven Threads is also a member of 1% for the Planet which is an organization that “certifies reputable giving,” so customers can also be sure that their purchases at Wolven Threads are actually going to the causes they say they are.

The dedication to offsetting carbon emissions, is an acknowledgement from Wolven Threads that their production process is not perfect, but that they’re doing everything they can to reduce their impact on the environment, which I appreciate! The process of converting plastic bottles into non-toxic pellets, then into yarn which is woven into fabric which is finally made into clothing does take a lot of energy. I cross checked the process of rPET production with a scientific study to see if there was any way Wolven Threads could be more sustainable in this process, and found that the company is basically doing almost everything they can to be sustainable. The study did state that bottles can be put into a closed-loop recycling system many times before finally being made into rPET, which would reduce their environmental footprint even further, but there is nothing largely significant that Wolven Threads is missing out on. For this, I’m giving them a 2.5 planet review for this section because I believe that they go above and beyond not by just stating that their process is better than the alternative, but by really doing everything they can to minimize their impact on the environment; there are still, however, other textiles whose production has a smaller impact on the environment, which is why I am not awarding them a 3.

Like many modern brands, Wolven Threads dedicates a page on their website to “transparency” and sharing their commitment to their workers and production partners. The rPET fabric is created in China and the clothes themselves are also manufactured in China. They state that they have a Workplace Conditions Assessment certification to ensure that “labor, wages, work hours, health, safety, and environmental practices” are in line with what is expected and that they achieved an 87% facility score, which they say is “pretty good.” They don’t actually share the meaning of that score, just the number, however, the certification itself seems to be pretty widespread and legitimate. Another thing that I appreciate about Wolven Threads’ transparency page is that they actually share photos of the workers who make their clothes, which is quite rare. Of course, all this information should be taken with a grain of salt, but compared to most competitors, it does seem as though Wolven Threads has a good relationship with their workers.

Wolven Threads also states that China is much further ahead in recycled fabric manufacturing than the United States and that manufacturing the products in the same place where the fabric was produced takes much less carbon emissions than producing the fabric in China and then shipping it to the United States to be made into garments. I personally appreciate this rationale for the location of their production as a consumer, because it helps me understand Wolven Thread’s thought process behind the location of their factories. I’m going to give Wolven Threads a 3 for this category, as I really believe that they really go the extra mile in transparency.