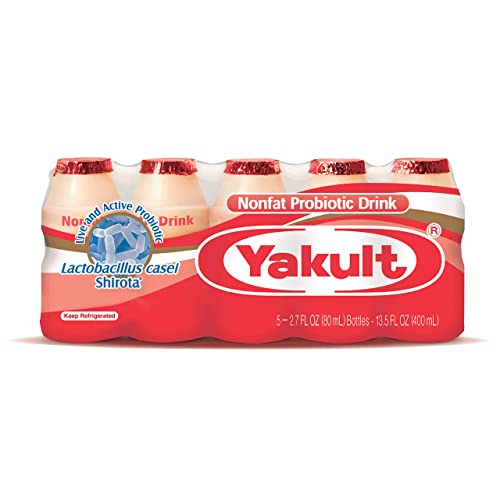 Yakult is a type of yoghurt drinks originally invented by Japanese scientists. It advertises itself as probiotic milk beverage, meaning not only is it a sweetened drink, but it could be seen as a health supplement as well. It is a remarkable Asian brand which is very transparent, thorough and committed to improve its sustainability approaches.

For the ingredients of the drink, bottles of Yakult mainly consist of water, skimmed milk, glucose-fructose syrup, sucrose, and live Lactobacillus casei Shirota bacteria. This bacteria or probiotics is promoted as ‘being helpful to improving the proper functioning of the human digestive system and improve one’s appetite’, and is prepared by adding glucose to skimmed milk, and heating the mixture at 90 to 95 °C for about 30 minutes. After fermentation, water, sugar, gums and lactic acid are added. All of the ingredients are currently sourced locally, hence they are rather sustainable.

For the packaging, on the negative side, Yakult comes in a small plastic bottle. As announced in July 2021, Yakult is falling behind on its ambitions to make its bottles less harmful to the environment by only aiming to reduce plastic content by a mere 5% or to make them fully recyclable by 2024.

On the positive side, in 2020, Yakult Australia stopped including single use plastic straws in response to ‘valued customer feedback regarding the impact of plastics in the environment’. Yakult may be starting to realize that plastic is not necessarily the best form of packaging when it comes to health both to people and the environment.

It is very commendable that Yakult is buying resources, manufacturing and selling its bottled drinks with low carbon footprints.
Although Yakult sells to more than 40 countries to the world, it is developing its global business with a local focus. Production and sales networks are increasingly localized on the community level. Offices, plants and employees have deep ties to the local communities. Sample locations include Mojokerto in Indonesia (2014), California Plant in the United States (2014) and three separate plants in China (2014-2017). In this way, high levels of carbon emissions during international shipping are avoided both from sourcing raw materials and transporting them to customers.

As released in the press in July 2021, Yakult Japan is setting an ambitious set of sustainability strategies to simultaneously reduce greenhouse gas, plastic, and water consumption ©Yakult Honsha

Historically, Yakult has successfully reduced emissions in the past. Its goal in 2016 was to reduce greenhouse gases by 5%, and it exceeded its goal to reach a 5.9% decline in emissions by the target date. All detailed goals and clearly lined up with its achievements, making it an outstanding corporate that not only states CSR goals, but also adopts transparency in publishing its actions and results.

Additionally, Yakult is also highly commendable in its multi-faceted approach in improving its sustainability impacts. Not only are they targeting emissions, but they are also on preserving biodiversity, environmental impacts of packaging and waste recycling. They truly take an end-to-end approach in considering every single aspect of their operations, instead of just focusing on one aspect and boasting about its efforts.

Yakult has detailed its plan to achieve net zero carbon emissions by 2050 through its newly established Environmental Vision 2050, which will also include efforts to reduce plastic packaging by 30% by 2030.