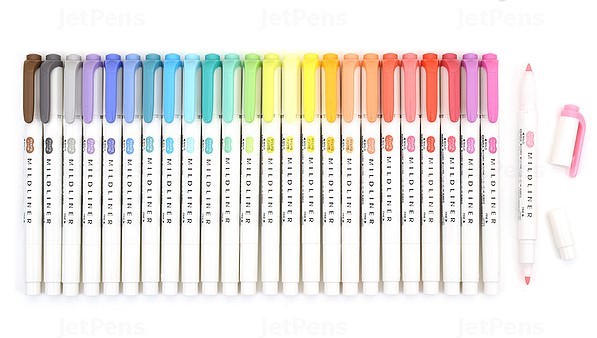 If you have had any interest in the online study community, bullet journaling, or Japanese stationery, you’ve probably heard of these infamous highlighter/markers that come in aesthetic pastel and vibrant colors. These double-pointed markers with a bullet tip on one side and a chisel tip on the other come in 25 beautiful colors, and to be completely honest and upfront, I own all the available packs. The original five-pack of assorted fluorescent Mildliners was advertised as a muted version of traditional highlighters that was less harsh on the eyes, hence the name “mild-liners”. However, as Zebra released more and more assorted colors and packs, Mildliners became better known for its versatility as a creative marker for planners, notes, artwork, etc. Up until August 2018, these markers were only available through Japanese retailers and suppliers, but with such high demand, the Zebra Pen Corporation, the U.S. subsidiary of the Japanese brand, began distribution at major U.S. retailers. Given the popularity of the Zebra Mildliners, many other stationery companies have also come out with their own line of pastel highlighters.

Unfortunately, as pretty as they are, the Zebra Mildliners are not very sustainable for two main reasons. First, the inherent business of a pen/stationery company is relatively unsustainable. The product lifecycle of plastic pen bodies, paper notebooks, and ink refills is very linear. One purchases a pen, uses up the ink, throws the pen away, or buys another plastic-encased ink refill. In the case of the Mildliner, Zebra does not sell refills for this product, so once the ink is used up, the marker becomes waste. Secondly, Zebra is a privately held company, so they aren’t required to publish detailed reports to manage their nonexistent investor relations. In an industry where no one expects a company to necessarily be sustainable and in an ownership position with no shareholders to accommodate, Zebra Pen Corporation doesn’t even make an effort to greenwash. Their website’s social responsibility section is two vague paragraphs about a diverse team and social/environmental responsible business practices with zero evidence to support such broad claims. The one redeeming sustainability-themed quality of the Zebra Mildliners is their transparency regarding their certified non-toxic ink formulas, which is why they received a 0.1 planet rating.

Each Mildliner consists of the white plastic barrel and cap, double-ended felt-tips, and the water-based ink.
Like many plastic casings, markers caps, barrels, and plugs are made from a plastic resin derived from the extraction of natural gas and crude oils. The ink reservoir is made from polyester, which is derived from petroleum, and the felt-pen tip is made from water and powder. Zebra does insist that all their products are made from BPA-free plastic. Because these parts are made from nonrenewable sources without any existing recycling systems, Zebra Mildliners and similar writing instruments are largely unsustainable.

By analyzing the Safety Data Sheet (SDS) for the Mildliner ink (for the majority of colors), it is clear that the chemicals used for the ink composition have been formulated with safety in mind. The ink is made of 30-55% pigment dispersions (for color), 15-25% glycerol, 30-45% water, and 0-1% additives. There are little to no physical, health, or environmental hazards — the only few being a category 3 skin corrosion/irritation and a category 2 eye damage/irritation, which both can be treated by rinsing with water. In addition, Mildliners are AP-certified non-toxic, a product seal approved by the Art and Creative Materials Institute, Inc. (ACMI) that indicated it’s been tested by a toxicologist and accurately labeled that is compliant with federal and state laws.

Before expanding internationally, the Zebra Mildliners were produced and sold in Japan. Now that Mildliners are more easily accessible in major Western countries than they were previously, Zebra says that the parts are from Japan, but are now assembled in Mexico. As a result, there are likely increased carbon emissions released from global transportation of products and materials. Regrettably, I wasn’t able to find much information regarding the specific production process for Mildliner markers. However, it’s likely that the production process is fairly similar to other markers and highlighters, which involves a factory that automates the creation of the marker parts, its assembly, and its packaging. If Mildliners are produced in the same manner, it’s important to acknowledge that the process is probably very energy-intensive, water-intensive, and carbon-intensive.

Founded in 1982, the US subsidiary of Zebra is a very small company with around 50-100 employees based out of Edison, New Jersey according to LinkedIn. All the different websites of the individual subsidiaries of Zebra (Mexico, UK, Canada, and US) contain essentially zero details about their employees, management structure, diversity and inclusion, distributors, or suppliers. The only material aspect you can find online about Zebra’s values as a business is a list of nonprofits and charitable organizations that Zebra Pen Corp claims to financially support, but they have no further specificities about the nature of these partnerships except for Association of Zoos and Aquariums (AZA), a nonprofit coalition of animal-centered attractions dedicated to animal conservation, education, and science. Because Zebra’s mascot is Zen, an enlightened zebra, the partnership with AZA is an extension of Zebra’s branding through a sponsored live zoom stream from the Elmwood Park Zoo. Some of Zebra’s other philanthropic endeavors include City of Hope Helford Clinical Research Hospital, Kids in Need, The National Breast Cancer Foundation, Inc. (NBCF), The American Heart Association, The United Way of Central New Jersey (Adopt A Family), and Industries for the Blind and Visually Impaired. While it’s great to be supporting a wide range of important causes, Zebra’s lack of transparency regarding its own business team is still overall upsetting and unsustainable.